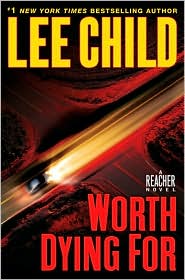 A friend (with whose opinion I generally agree) told me I had to read Worth Dying For, Lee Child’s latest Jack Reacher novel. I had never read a Reacher novel before (Worth Dying For is fifteenth in the series) and it’s been ages since I read a New York Times Bestselling author. What the hell? I read a couple of the reviews and actually looked forward to the book.

I have a lot of pet peeves when it comes to writing. One of which is when ‘It was . . .’ starts off a book. If the first two words of a book start are ‘It was’ I usually stop reading right there. Well, at least Child held off ‘It was’ until the second sentence. Another pet peeve is overuse of the word ‘and’ (it’s a device called polysyndeton, and I’m not a fan). On page five, I counted eight of ’em in one paragraph (one of the smaller paragraphs). Child also likes to repeat himself. He does it for dramatic effect and it occasionally works, but often I found it distracting. He also likes to over-explain. I like white space in my books. Trust me, one doesn’t need a full-page paragraph description of cornfields and the flatness of Nebraska.

Okay, now how do I say this? In spite of all the irritations and frustrations, I actually had trouble putting this book down. Jack Reacher is an ex-military cop, killing machine. Hitching his way to Virginia, he stops in a small town in Nebraska. Unable to mind his own business, he gets involved in a domestic violence incident. He meets a woman who was beat up by her husband and Reacher decides to teach the bastard husband a lesson. It turns out the bastard husband is the son of one of three Duncan brothers who have taken over the town of sheeple (people who act like sheep). The town has no police force and it seems that the State Police are never closer than sixty minutes away. But that doesn’t matter because no one has the spine to call them. No one dares cross a Duncan. The Duncans are also involved in a smuggling operation that this stranger might disrupt if he keeps nosing around. They decide that they have to make an example of this stranger.

So why did I have trouble putting this book down? As ridiculous as the plot seemed, Lee Child has a great talent for building suspense (especially ending chapters with wonderful cliff-hangers), tension, and characters you want to see get the crap kicked out of them. Unlike most heroes, who will stop as soon as the bad guy gives up or is knocked out, Reacher finishes the job.

Enough, a person might say, if that person lived in the civilized world, the world of movies and television and fair play and decent restraint. But Reacher didn’t live there. He lived in a world where you don’t start fights but you sure as hell finish them, and you don’t lose them either, and he was the inheritor of generations of hard-won wisdom that said the best way to lose them was to assume they were over when they weren’t yet.’ p. 46.

It then goes into detail of him kicking the crap out of a couple of thugs, especially after they’re down.

Is it Worth Dying For? Not hardly. There were a lot of irritants and plot sequences that were almost comical. But one of the biggest frustrations for me was I kept wanting to read more.