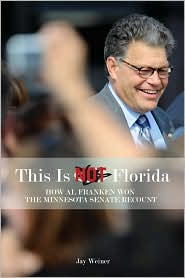 If I were a better book reviewer, I would have read and reviewed Jay Weiner's This Is Not Florida: How Al Franken Won the Minnesota Senate Recount during Minnesota's latest recount between gubernatorial candidates Mark Dayton and Tom Emmer. However, Emmer conceded on December 12th after the legally mandated recount confirmed Dayton's 8,700 vote lead, and I started Weiner's book five days later. I could have noted the differences between the 2010 and 2008 recounts and offered some timely insight into the process. I may have also linked to this website from Minnesota's Secretary of State that showed how the simple act of filling in an oval is challenging for some voters. (A note of caution: Clicking on this website may cause one to weep for the future.)

My ill timing notwithstanding, I managed to read Weiner's book, which is a comprehensive account of how Franken won an election he was losing a day after it ended. This Is Not Florida examined the main legal players and the recount process from the canvassing board to the Minnesota Supreme Court. A writer on politics and sports business for MinnPost.com, Weiner used his journalistic prowess to dig into the histories of all the players and recount those histories and tie them into the 2008 recount. Weiner also connected both the larger political climate in the United States and the unique brand of politics found in Minnesota.

Though This Is Not Florida is comprehensive in its content, the extensive histories are at times laborious to read. Though I can see how Marc Elias' formation as a Democratic recount expert proved valuable for Franken's victory, I wanted to get at the meat of the election trial. However, I had to endure reading through the history, recount mechanics, and canvassing board process before I reached the trial information on page 155 of 227. This was strange to me, as this phase of the entire affair took the longest to complete (January 13 to July 7) and perhaps was the most influential on the results. This made the book imbalanced in content and incomplete, as I was left wanting more in both Supreme Court coverage and analysis of the process as a whole. I can see how adding these analyses could make the book double in length, an undesirable proposition for me as a reader trying to connect all the players and decisions without any charts or graphics to aid in navigation. However, I feel that less in the way of history and more in the way of Supreme Court information would have done a better job at showing how Franken won the Senate recount than truncating the story in this manner.