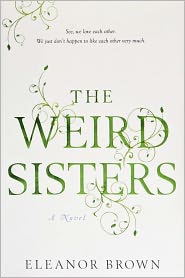 In Eleanor Brown’s The Weird Sisters three women, the Andreas sisters, return to their childhood home to care for their mother who is fighting breast cancer. Named after Shakespeare characters by their Shakes-professor father, they quickly fall into their childhood roles. Rosalind, or Rose, is the competent, bossy oldest. Bianca, or Bean, is the invisible middle child looking for attention. Cordelia, or Cordy, is the flighty, beloved baby.

While they return home under the aegis of helping mom, each sister is also fleeing her personal demons. Rose is faced with a fiance who wants her to move to England where he’s landed a two-year gig at Oxford. Bean runs from New York a few steps ahead of her creditors after being fired from her job for embezzlement, and Cordy returns after years of aimless wandering with a bun in the oven.

It sounds so simple, but I really enjoyed reading The Weird Sisters. It reminded me of how I have always turned to books for comfort. This one is comforting and comfortable. It also hit really close to home. See, I too have sisters (there are four of us) and our mother is fighting breast cancer. But that’s not the only reason I enjoyed this novel so much. Oh no.

First, it’s smart. The Andreas family is full of readers. Books are their entertainment, their distraction, and sometimes when they don’t feel like dealing with the emotional drama of their lives or their family, books are the shields they hide behind. Raised on Shakespeare the family drops the Bard’s quotes like some people quote movies. Sometimes they find this odd quirk charm and other times it’s annoying. At one point Cordy says she wished her father would say what he meant instead of dropping some cryptic, difficult to interpret Shakespeare line.

Second, it’s funny. Or maybe it’s more clever. Perhaps amusing. It would be easy for the sisters to fall into maudlin self-pity (and sometimes they slip a little), but they’re smart women and smart people are clever. It’s not like laugh out loud funny, but more of the kind of humor that makes you think, “huh, nice one.” But even more than that, the way the story is woven together is very clever. I don’t want to give too much away, plotwise, so you’ll have to trust me. Plus, I suspect that if I were more up on my Willy Shakes, I’d have discovered even more smarty-pantsness in the telling of this story. However, even though most of what I know about Shakespeare comes from the movie “Shakespeare in Love,” I never felt that my ignorance hindered me from “getting the book.”

Third, it’s about women defining themselves. I have to admit I worried that The Weird Sisters would devolve into well-worn, boring, and, frankly, offensive, chick-lit territory where each sister could only be happy and fulfilled in a relationship with a man. While the ending does have a bit of happy bow to it, each sister only gets that happily-ever-after when they’ve, on their own (with a little help from their sisters), figured out what the hell their problem is and how to overcome it.

Finally, what I liked most, was that this is a story about sisters. The emotion between the women is real, genuine. Brown excellently and honestly captures that love/hate/hero-worship aspect of sisterhood. That kind of “we’re all in this together even though we don’t like it one bit” aspect of it. She wonderfully captures how, when you have sisters, you don’t just struggle to define yourself as a person, but also who you are in relation to these other women who have had so much influence over your life, whether you like it or not.