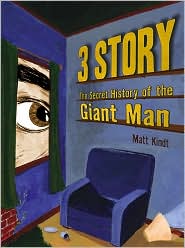 As a 6’5″ woman, I am drawn to stories about the incredibly tall, or Giants as they are called. It’s the same thing that drew me to Beverly Cleary’s Beezus when I was a child, the ability to find comfort in a fictional kindred spirit when one cannot be found in your actual life.

It’s why The Giant’s House by Elizabeth McCracken is in the top five of my all-time favorite novels. It’s why I picked up Matt Kindt’s excellent graphic novel 3 Story: The Secret History of the Giant Man even though I could tell from the cover it was going to break my heart.

Since this is a graphic novel, let’s talk about the cover for a moment. What you can’t see from the image up there is that the cover is die-cut. The window is actually a window, and when you pop open the cover, you’re greeted with Craig Pressgang, the giant man, staring forlornly into space. Close the cover and he’s peeking into the living room of his own home. A home he is too big to fit into anymore.

Kindt tells Craig’s story through they eyes of the women in his life and slippery watercolors. The book opens with his mother who struggles to raise her extraordinary son all the while mourning his father who was killed in WWII. Her grief over losing her husband, Butch, make her try to hang on tightly to Craig and even though she tries she knows he is growing beyond her grasp and it’s like losing her mate all over again.

When Craig slips out of his mother’s life he slides into Jo’s. Jo is a college student studying architecture and she’s intrigued by Craig who is literally the big man on campus. Even though she can sense that things will not end well for them she plunges into a romance with Craig who becomes something of a celebrity, selling his handprints at art auctions, taking endorsement deals in the hopes of being able to clothe his ever growing body, and eventually becoming a member of the CIA. It all sounds preposterous but in Kindt’s able hands it not only makes sense, it seems perfectly logical.

The final story is told by Craig’s daughter — he and Jo managed to create a normal child during the short period of time where they were capable of having sex — who is on the hunt for her father who has disappeared. After a parade tragedy, and no longer being able to hear or see or touch his own family, Craig takes off and becomes a sort of Yeti-like creature sometimes spotted in the wild, but getting actual proof of his location is difficult.

These women try so hard to love and understand Craig, who is, ultimately, alone. And it’s only through their desire to know him that the reader gets to see how isolating actually being different, as opposed to think you’re different or feeling different, is.

I told you, heartbreaking.