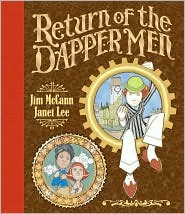 Confession #1) I am a comic book nerd.

Confession #2) I do not bag or board my comics and generally enjoy them because of the stories. (GASP!)

I know, right? Actually enjoying comics because of the stories and not for the incredible outside (way outside) chance that they may one day hold any sort of monetary value (because they probably will not).

Confession #3) In order to avoid death by comic book avalanche, I will get rid of comics that I did not have fun with or did not touch my soul in some way.

Jim McCann and Janet Lee’s Return of the Dapper Men will be in my collection for quite some time.

This graphic novel is one of the best things I have come across this year (Editor’s Note: Tony actually wrote this review in 2010). It is a book I would give to someone who generally looks down their nose at comics and yell into a megaphone 18 inches from their face, “THIS! THIS IS WHAT COMICS CAN BE! THIS IS BEAUTIFUL! DEVOUR IT!”

Return of the Dapper Men is a fairytale story of Ayden, a boy with many questions about the world around him, and Zoe, a non-speaking robot girl. Ayden and Zoe live in the world of Anorev which long ago (before anyone can remember) at 3:14 P.M. had a “tick” that was not followed by its corresponding “tock.” There are no adults to be found and the world lives in a perpetual afternoon with no bedtimes or nap times, a childhood paradise if you will.

Then, from out of the sky, fall 314 well dressed and accessorized, or “dapper” men. The 314 dapper men begin to set the world right except for one of them who takes an interest in Ayden and Zoe. He begins to push Ayden toward the answers to all of his many questions about the world but without giving him straightforward replies. Ayden is encouraged to figure out the answers for himself instead.

While the story is fantastic and lyrical, I dare say the real thing to note here is the art. It is one of the most unique things I have ever seen in comics and (for a guy who never says “breathtaking”), it is. . . that, breathtaking I mean.

Janet Lee, the artist, begins with pine boards, and paints them. The wood is them sometimes layered with printed pages from various books, which is then painted over (not completely, so you can still see some of the text through the paint). The figures are then hand drawn and painted on a separate piece of paper, cut out, and glued to the painted board. The end result is an incredibly textured page that you insist upon running your hand over to make sure they cannot be felt on the page.

All of that wrapped around a story about the importance of asking questions, embracing change, and moving forward. And then to top it all off and put a bow on the whole work, in the very back of the book lies a fitting three sentence summary, “Time cannot show favor or weep. Time can slow to allow you to savor moments, and can help old wounds heal. But most of all, it lets you know when you have to move on. . . ”

Well now look at me, I’m gushing. But seriously, Return of the Dapper Men is a gorgeous and beautiful fairy tale told by two people whose whole heart was in the story and really had something important to say. And in the end, that’s all I’m asking for in my comics. Not a return on investment. Just heart.

Did I mention the book has a place marker ribbon?! Total sign of class.