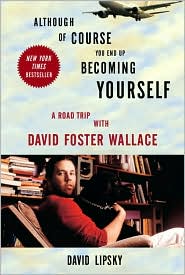 As I was reading Infinite Jest, I was simultaneously reading Although of Course You End Up Becoming Yourself: A Road Trip with David Foster Wallace, a straight up five-day dialogue between the author David Lipsky and DFW, taken from tapes made while D Lips was interviewing DF-Dubs for a piece in Rolling Stone that was eventually killed.

What a treat, this chance to eavesdrop on these two dudes as they kick it at DF-Dubs’ pad, at airports, diners, long car rides, and a book signing at The Hungry Mind bookstore in St. Paul. It is smart, it is funny, it is silly, and at times uncomfortable. And there is a part in the afterword where anyone with a duct will shed real-live tears and mourn the loss even harder.

The thing I keep returning to after reading this is this: David Foster Wallace is so … normal. Here he has just published this massive piece of fiction that continues to give people brain spasms in their pleasure centers, and in his first moments with Lipsky he’s lamenting the fact that it hasn’t gotten him laid on the book tour. He expresses envy at Lipsky’s rental car, which hardly sounds like a sexy piece of machinery. He is a man repeating the same refrain to ticket agents and wait staff: When asked if they are together, DFW will respond “Yes, but not on a date.” He is a guy tucked away for years pounding out this Gen X trophy from start to finish. He is a guy in need of a Styrofoam cup that he can dribble chaw into.

He is a guy who can totally geek out over the movie “True Romance” or the works of David Lynch, and at the same time deliver a pretty valid reason for why Alanis Morissette is attractive.

I was left with four thoughts when I finished:

A) I’d love to see what would Lipsky would have done with all of this material. How he would have crafted that into a feature about this rising star literary hot shot. (He says he kind of did this with the DFW obit that ran in Rolling Stone). There are definite moments where you can just see where the piece might take bloom. If it was my story, I’d open at a part where one of DFW’s students asks:

“Done being famous yet?”

B) It would be super cool to see a staged reading of this book. Two men (or two women) on chairs, facing an audience and having this conversation as the backdrop changes.

C) I wonder if DFW did in fact go on to read Lipsky’s novel The Art Fair, (I know I’m gonna) which he says he is going to do and then send him a note. “I’m gonna be very curious to see how — to see what it’s like being inside your head,” DFW tells him.

D) These two Davids seem to have enough in common, get along well enough, to remain in each other’s orbit, yet they never met up ever again. It must be a strange dichotomy, spending five days with a stranger, for both the interviewer and the interviewee, and then to just walk away from it. Also: It must suck very badly to spend five days with a stranger who a) is recording everything you say; b) must record everything the other stranger says.

There is, admittedly, a cute factor to reading this book, which is really adorable in the same way that it is adorable to watch men play shirts versus skins on a playground basketball court. But with their brains.