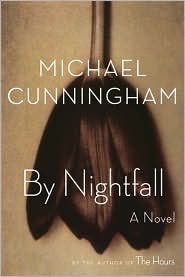 When I like a book ? I mean really, really like it ? I often wish I had not read it so I could read it for the first time all over again. Michael Cunningham's By Nightfall is one of those books ? so richly dramatic, sexy and beautifully worded, I felt I finished its 238 pages far, far too fast.

I didn't think I'd necessarily like By Nightfallwhen I first met two of its main characters, Peter and Rebecca Harris. Upper-class, middle-aged fixtures of the New York art establishment, Peter and Rebecca are two of those creatures who only exist in fiction ? attractive, privileged people overcome with a malaise their good fortune just can't cure. Typically, the woes of these sorts of rare beast bore me. But then who should come to stay at the Harris' SoHo loft for awhile but Mizzy, Rebecca's younger brother? Mizzy (that's short for “The Mistake”) is cripplingly drug-addicted, brilliant when he wants to be and dangerously aware of his superabundance of charisma.

In no time at all, he awakens things in Rebecca and, in particular, Peter that they'd rather let sleep. For Rebecca, it's an unproductive sense of responsibility and need to mother her family's wayward lamb; for Peter, it's an odd sexual attraction that escapes his every attempt to pin it down. It's when Mizzy decides to put his magnetism to use on Peter and Rebecca that By Nightfall really heats up.

Cunningham wastes no time in letting his plot get steamy, but his writing is so lovely and striated with beautifully sculpted lines that the plot could've gone cold and I may not have noticed. “Insomniacs know better than just about anyone what it is to haunt a house,” he muses in one of the many finely observed sentences that amply stud his novel. Cunningham writes on and on about Mizzy, but each description ? his “pale, princely beauty,” his countenance “like that of a dying saint” ? only tantalized me for the next. Every ounce of Mizzy's dangerous charm radiated from By Nightfall's pages.

I plan to read more Cunningham (I'm ashamed to say this was my first brush with him), but I can't shake the feeling By Nightfall may have been something special and not easily replicated.