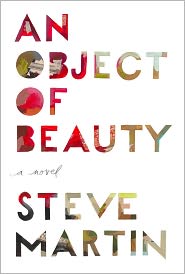 The weirdest thing about reading a novel by Steve Martin is hearing his Steve Martin voice narrating. It’s that kind of friend’s smart dad voice, a guy with his own library and couture reading glasses who can also bust out a head band that makes it look like he was shot through the skull with an arrow. That kind of voice. And it is not an unpleasant way to spend nearly 300 pages.

An Object of Beauty is a kind of simple, smoothly written easy reader, the story of Lacey, a sassy young go-getter in the New York City art scene starting in the 1990s — as told by her somewhat mysterious arts writer friend Daniel. There was a brief something between them that eased into a friendship. He starts her story with Lacey stuck in his craw, unable to write anything else until he writes about this irreverent, smart, enigma.

Lacey starts in the basement of Sotheby’s, learning about paintings and the value of paintings, and the business of marrying collectors with these paintings. She whizzes off to a gallery, where she learns more, travels further, flashes more winning smiles. Then she opens her own space in Chelsea just in time to watch people’s art budget’s become absorbed by the tug of necessities. There are men, always men, and there are episodes. But mostly she breezes through the book, a gust of fresh air, a witty side comment, before easing herself into a position to have sex beneath a Matisse.

As much as this story is about Lacey, it is also an art history lesson about the state of the scene during two decades. A period that spans multi-million dollar deals, to newbie artists seeing similar dollar signs as the masters, to galleries with tumbleweeds blowing through them at an opening exhibition. Martin curates this, including color photographs of real-live pieces of art from real-live collections. In some ways it was like Steve Martin was strumming away at his banjo and decided to write a book that incorporated a bunch of art and the story of art existing in a certain time period, and then invented a girl to give it legs.

And to that end, there isn’t a ton of meat here. The story has few peaks and valleys and there are times that would be total danger ranger set ups in other novels. Lacey, with a super expensive art delivery, makes a detour to visit some nearby museums. Most heroines would experience a catastrophe. Losing the painting, or spilling ketchup on it. Lacey has one pulse-increasing moment that quickly dissipates.This is standard fare throughout the story. But it’s kind of nice and the story is pleasant with touches of good humor, usually coming out of Lacey’s mouth.

True story: Last week, before I started reading this book, I had a dream that I met Steve Martin. I touched his arm and said “I really like your book,” then I fumbled. I realized he had more than one, and I couldn’t remember the names of any of them. Then finally I said “Shop Girl. … The book, not the movie. … Well, I liked the movie, too.” And he was nice and all, but just smiled and walked away and I made a vow in that dream to get thee to a book store and read his new book so I would never be in such an embarrassing situation ever again ever.