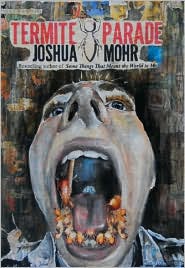 There is this pit that so many writers fall into when they have a character in crisis: They send the muddy-brained protagonist on a road trip. In the case of Joshua Mohr’s novella Termite Parade, Derek points his truck toward Reno. He’s on the run from one of those epic social shames of a night out with his hot-tempered girlfriend Mired. The night started with a Bon Voyage party for one of Derek’s lady friends, during which Mired marinates in booze and makes all sorts of embarrassingly loud insinuations about what her boyfriend wants to do to the hostess.

Eventually Mired is 86’ed from the party and passes out in the car on the way home. Derek carries her into their San Francisco apartment, and as he’s lugging her up the steps like a new bride, she continues to verbally assault him all slurry-like. In a bit of a whiskey haze himself, Derek turns around and drops his girlfriend down the steps. A limb is broken, teeth shatter, bruises and bulges form. When she sobers up, she is led to believe she fell down the steps. Derek struggles with a crisis of conscience, made more acute because his twin brother Frank — called in for backup — seems to suspect what really happened.

While Mired is at the dentist getting her face fixed, Derek high-tails it out of the waiting room, and heads to Reno to clear his brain with Wild Turkey and some wise words from a waitress at a diner who looks eerily like an older version of Mired. Meanwhile, there are flashbacks to the mismatched couple’s time together, Frank’s arty itch to create innovative films, a sort of hybrid between fiction and reality that leans more reality and voyeuristic.

This novel-in-three-voices starts out promising, with a clever vignette where Derek is in the middle of a whiskey-on-the-rocks night, and runs out of rocks. He makes due, using frozen peas instead. Then it segues into some deliciously lurid dental work involving teeth shaved to stumps, blood, and smells. And then characterization, motivation, and continuity go off-roading and never come back.

The relationship between Mired and Derek is a mix of charming made-for-TV moments and drunken spats that seems to have some sort of genesis in the collected works of Bukowski. One minute Mired is fired from her job, and Derek presents her with a cathartic pinata filled with her favorite kind of Jelly Belly jelly beans. It’s cute: They lay on the floor eating the candy. But beneath this is the idea that these two plus booze equals a toxicity that they are in therapy to fix, but which is only seen in Derek’s single instance of domestic assault. Like the confusing relationship, the characters remain a bit fetal: Derek is this weird pseudo badass, a sort of front that feels like a hat he wears only sometimes. Mired is smart and cultured, but a proverbial cutter when it comes to relationships. (A history she chronicles, of course, because that is what writers do in tandem with sending characters on road trips). Twin brother Frank is a hard character to peg. He seems to have residual anger at Derek, and uses the truth about the fall as a sort of blackmail tool.

Also: There is a continuity problem early in the book where it becomes impossible to trust Mohr with this story, which is already shaky. Frank has begun making videos on the streets of San Francisco. He tails unsuspecting characters, gathering real moments. He finds a woman walking alone in a dark park, which is totally danger ranger. To add to the bad decision making, she sits on a bench, pulls out a book and begins flipping pages. By now, Frank has hidden himself and continues to follow her with his camera. She’s approached by a man who starts by asking her if she has a cigarette, and ends up robbing her. Frank gets the whole scene, opting to film rather than assist her. He’s thrilled. This is his best moment of video ever. A week or so later, he’s back in the park and the same woman returns. She sits on the same bench and is approached by the same man, who robs her again.

And here Mohr ruins what could be an intriguing scene: Frank sees the woman approach the bench for the second time. Sit down. Take out her book. And he begins filming her again. But later, back at the apartment, Mohr has Frank viewing the footage:

“… and the next robbery started to play on the TV, the woman walking up to the bench, sitting, opening her book.”

Oh, Joshua Mohr. Frank didn’t record that part. Go kick your editor in the nuts. This makes it hard to swallow other things: like Mired having a broken wrist, yet she continues to function normally, worried about her fake teeth, but never mentioning difficulty with carrying or opening things until near the end of the book when she hooks up with an ex-boyfriend, a vegan Buddhist who is inexplicably still attracted to her.

There was so much promise in that whiskey glass filled with peas. But Termite Parade sputters into cliche, confusion and bad ideas. The best thing about this book is the cover art by Aubrey Rhodes.