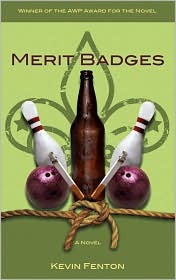 When Kevin Fenton‘s novel Merit Badges landed on my doorstep the part of that me that could still smell the small town bowling alley I worked at for years cheered right out loud.

Apparently, I’m not alone with the cheering. Merit Badges already won the AWP (The Association of Writers and Writing Programs) Award for the Novel, and the Strib called said it “positively glows.”

You can see Kevin and his bright, glowing novel in all its eminence at the launch party sponsored by Common Good Books at 7:30 p.m. tomorrow (Jan 12) night at the Virginia Swedenborgian Church, 170 Virginia St., St. Paul. If you can’t make the party, Kevin will also be reading at 7 p.m. Wednesday January 19th at Normandale Community College.

In the meantime you can read his answers to the six questions we always ask.

What book(s) are you currently reading?
Jane Leavy's The Last Boy: Mickey Mantle and Peter Geye's Safe from the Sea. They're the Mantle and Maris of father issue books. I was re-reading Virginia Woolf's last diaries for a while, until she started making graphs of the depression that would lead her to suicide. Think I'll save that for May.

Have you ever had a crush on a fictional character? Who?
Nick Hornby caused me to share his protagonist's crush in About a Boy.

If your favorite author came to Minnesota, who would it be and what bar would you take him/her to?
Bad things happen to me in bars. I think I'd like to take Lorrie Moore and Craig Ferguson to a Twins game, though.

What was your first favorite book?
Wonders of the Animal Kingdom. It was a giveaway at National Foods in Winona in the 60s.The first week you-or your Mom, who was paying for the groceries- got the book, which was a big sort of paperback photo album. Then you got a packet of photos of animals, including dinosaurs, every week. You then adhered the photos to the book.

Let’s say Fahrenheit 451 comes to life, which book would you become in order to save it from annihilation?
Evil Kevin would save his own damn book. I'm assuming the Bible and Shakespeare are taken care of, so I should pick something more personal. I think it would be Colson Whitehead's The Colossus of New York, his beautiful book length essay/poem about New York. Or maybe Greil Marcus's Mystery Train: Images of America in Rock ‘n’ Roll Music because while saving a book, it would also help save rock music.

What is one book you haven’t read but want to read before you die?
One? I want to read a book in a language other than English before I die. I'm relentlessly mono-lingual and horrible at other languages, flunking German and grabbing a mercy D in Ancient Greek. But I'm resolved to give it another shot.