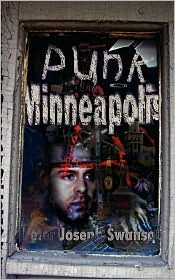 For me, Peter Joseph Swanson’s latest novel, Punk Minneapolis, hits very close to home. It takes place in 1989 on my old stomping grounds ~ the Uptown area of south Minneapolis. Okay, I was never really a true punker (more new wave), never wore a Mohawk, and by ’89 I had settled down. It was more my stomping ground in the early to mid 80s. But the images and people Swanson conjured up brought back a lot of memories. He realistically captured the time and atmosphere beautifully.

Raven, Becky, Sandra, and Mark are high school grads working in a pizza joint. Beer is their God. Constantly telling each other how cool they are, their insecurities shine, like if they say that they’re cool often enough, maybe they’ll even convince themselves. Raven dreams of making a mummy movie for public access cable. He hopes that Tope, the coolest punker around, will write and sing the music. Becky’s dream is to make Tope hers. All four are hyped to go to the Rooster Party, the coolest a once-a-year party located at a secret destination.

Hi Tope!” Then Becky quickly looked on the floor in concern to make sure none of her fake hair parts had fallen out where she could see. She tried to arch her back to make her female form push against the front of her shirt, but she looked unnaturally stiff about it.
“Eh!” He regarded her shirt anyway. p.24

Raven nervously pulled on his long black ponytail. “Did you write a cool mummy song for my movie?”
Tope cringed condescendingly. “Are you sure you’re going to make that movie? Really? Or just talk about it all night long at Embers like all the other poseurs just talk talk talk about how cool they all are?” pp. 25 & 26

Punk Minneapolis reads a lot like a slice of life of these characters. The plot is loosely based around their daily lives ~ and their days are very entertaining. There are also a number of supernatural instances thrown in ~ or are there? Swanson masterfully crafts each instance so they could be otherworldly or drug hallucinations, or maybe a little bit of both.

She wasn’t there for real, of course, it was some sort of hallucination or something, but I saw her face in my window. And then I saw her a little later on the street walking toward my place and she didn’t act guilty, so I think she was having an out of body thing, if she was doing it. But I don’t know. How would I know? How does one know things like that?” p. 101

Overall, Punk Minneapolis is a very enjoyable read. This is Uptown as it was in 1989. Ex-punkers, especially those who lived in Minneapolis, are going to appreciate this book. I guarantee it will bring back memories. For those that weren’t, it’s still a fun read of teenage angst mixed with punk humor. If you were a “yuppie f*cker,” you probably won’t like it ~ be prepared to be insulted – a lot. The characters can be a bit stupid and snotty at times, and hard to sympathize with as they can equally be caring and giving at others. But thinking back to when I was that age, that’s exactly what we were like.

My favorite line in the book (which pretty much wraps it all up): “Just because you’re all anarchists doesn’t mean you can’t all work together.” p 198