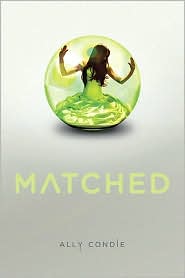 I read about Matched by Ally Condie in Entertainment Weekly of all places. I’m liking their ‘Books’ pages more and more. Coming off The Hunger Games trilogy and the craptastic Fallen, I was craving another YA novel, a really good one too. Thanks EW!

Matched is the Fahrenheit 451 future come to life. All but 100 books, poems, paintings, and songs have been destroyed, incinerated. Why? Because with too much information, our mind becomes cluttered and we are unable to focus. Sound familiar? The ominous ‘Society’ – the ruling body/government of Matched – has taken our information age fears and magnified them back to ourselves. Don’t know what book to read because there are so many titles out there? Don’t worry! The Society has pared it down to the Top 100. Not sure what song to play on your iPod? Fear not! The Society has taken over your playlist with 100 classics. And not only are they giving you a limited selection, nine times out of ten the Society can predict which one you will choose. Why? Because all your personal information is in the hands of Society and they know what’s best. I find it curious that Condie has named our oppressing overlords ‘society.’ Whereas the government dictates law, society dictates personal choice. And in Matched, all personal choice has been obliterated.

Condie sets a volatile stage for her main character, Cassia. The book opens with Cassia going to her Match Ceremony. The Society matches all young people upon turning seventeen. So there is no dating, no flings, no heartbreak. Based on genetics and all the information The Society has gathered about you, you are matched to the mate with the highest likelihood of optimal compatibility and reproduction. Creeped out yet? Cassia isn’t. She’s 100% a Society girl, believing in her heart that they do know what’s best. Cassia is matched with Xander, a childhood friend and all around great guy. However, it is not Xander’s information on her datacard. The face that appears before her is Ky, a handsome, mysterious loner. Cassia is then faced with a choice. And sadly, she has no idea what it’s like to have a choice. Free will isn’t something she’s familiar with.

A few days after Cassia’s Match Ceremony is her Grandfather’s Final Banquet. He’s eighty and Society says that’s old enough. Upon his departing, Grandfather bestows a gift to Cassia. A hidden note. Written on this weird thing called ‘paper’, in a script that’s hard to read, because it’s so slanty. Apparently handwriting is an ancient form of communication. Alls anybody does now is simply tap on a screen. Written on the paper is a poem. Not one of the 100 Poems Society has kept. An outlaw poem, “Do Not Go Gentle Into That Good Night” by Dylan Thomas. My liberal arts education is screaming, SCREAMING! How could this NOT be one of the 100 poems saved? It is probably the BEST example of poetry in the English language. What the hell was The Society thinking? But I know better. My English teachers would be so proud.

The poem does in the book the same thing it does now; it encourages one to fight. To rage against the dying light, whatever that light is. Here it’s Cassia’s innocence in thinking that a huge group of people know what is better for her than listening to her own heart. But it’s a struggle, a fight. Cassia doesn’t know how to fight. The flame of rebellion has all but been bred out of humanity.

At its core, Matched is the tried and true bad boy/good girl/good boy love triangle. Except the bad boy, Ky, isn’t teaching her how to smoke cigarettes, he’s teaching her how to write her own name. And the good boy, Xander, has a few bad boy tricks up his sleeve. Cassia, in the middle of it all, is constantly torn between this new found self-confidence and the rebellious nature of questioning The Society.

What I enjoyed most about Matched was the larger themes at play. Well, I don’t want to say larger, because that implies that they are farther off. The scary, overwhelming theme of how dependent we are on technology, how dull our minds have become because of it. Not knowing how to write? COME ON. This would scare me even more if The Huffington Post hadn’t declared handwritten letters and cards obsolete….last year! There is also the great philosophic question of, if I hadn’t told you to look, would you have seen what I wanted you to look at? Condie structures her story in such a way that young readers won’t be put off by the more adult themes. In fact, I think she has done a great job of revealing just enough to where younger readers might just come to their own conclusions. Either way, it’ll spark a dialog and inspire thought. Which is a rarity for some types of fiction, let alone the vampire-over-saturated YA novels.

I also want to applaud Condie for not having heroine with nowhere to go and no way to improve. Cassia is a good girl. She doesn’t come into her rebellion in the natural way that teenagers today do. It takes effort, it’s against her nature. Society has always been right up to this point, can they ever be wrong? Cassia constantly questions herself and I remember so vividly doing the same thing during my teenage years. She’s never dumb, but she doesn’t have all the answers either. There are times when she just wants to be with the boy she loves, and she’d do anything for him. But then Cassia isn’t ready to leave her family and the comforts of home. It’s such a brilliant mix. . . trippy sci-fi scary society of the future and classic love and longing and coming of age. But I can imagine that’s how some young people feel today. Exactly. Right now.