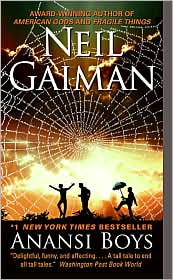 One of the best things in the future will be brain internet. And one of the best things about brain internet will be making vacation plans to spend a week in Neil Gaiman’s melon. Cruising the crooks and coves of his limitless lobes. Talking animals, super powers, world-trotting adventures. His one-foot-in-realism, where text messaging and heart break exist, his one-foot-in-supernatural where one can have his tongue severed, lost, returned, and live to talk again.

The sci/fi heartthrob with one of the most enviable messes of hair on earth is the definition of clever.

Gaiman’s strangely non-classifiable novel Anansi Boys is totally, totally fun. He has this great way of eschewing the cloak-wearing seriousness of talking robots, neon green thises and thats, and planets with a lot of Xs, Ys, and Zs in their names, but he still takes the boundaries of IRL and erases all the lines to allow his characters infinite leg room. It’s a nice combination for someone who has never identified a friend as a “Dungeon Master” or Googled “homemade Yoda ears.”

The super nondescript Fat Charlie is inches away from marrying the super virginal Rosie and just when he’s explaining how embarrassing it will be to invite his father to the wedding, he gets word that the enigmatic prankster dropped dead during an unfortunate karaoke incident. Phew. Fat Charlie busts a move to his father’s resting place, and things get a little wiggy with the former next-door neighbor who crazy talks something about Fat Charlie’s brother.

Wait. Fat Charlie doesn’t have a brother — oh wait, he does. Spider was sent packing by a neighborhood witch when he was young after some tomfoolery in her back yard. Fat Charlie summons Spider from the ether and whoa. This guy is intense: Handsome, charming, and hot damn does he smell good. Rosie can’t tell the boys apart, and sheds her virginity on impact with this cool cucumber. Spider mixes up some havoc at Fat Charlie’s place of employment, too. And under Spider’s influence, Fat Charlie wakes one morning hung over and sharing a bed surface with a young hottie he met the previous night at a bar. And it surely isn’t Rosie, his betrothed.

And every single page is LOLsville. Okay, there is one dud scene in the beginning where it seems this might lean hokey. And maybe it does stay a little hokey. But damn if it isn’t a stone-cold delight. Spider is this dynamo caricature who oozes awesome, an awesome that Fat Charlie absorbs as the going gets tough.