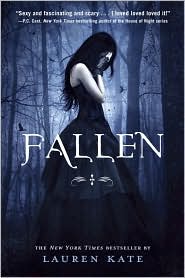 Fallen by Lauren Kate was my other cupcake pick at the bookstore this last time around. I had abandoned so many “adult” books that I made a conscious decision to only pick up Young Adult Fiction and give my mind a break. And while there are some killer YA novels out there, this isn't one of them.

Fallen is the snoozer tale of a human, Luce, and a bunch of fallen angels. There are no vivid descriptions of other-worldly beauty, no urgency between any of the characters, and the whole yawning mess takes place at a Savannah reform school. Reform school! Really? In 2010? Riiiight. In a matter of seconds after arriving at the reform school, Luce picks up a quirky BFF, a sassy handsome admirer, and instantly falls in love with Daniel.

Daniel basically ignores Luce, but can't help himself in getting close to her. Apparently, this is God's cruel joke to punish Daniel. Because for centuries, Luce has been coming back, every seventeen years ? and she and Daniel meet, fall in love, and then Luce dies. Apparently, upon hearing the truth that Daniel is a fallen angel, Luce's poor little human mind gets so overloaded she disintegrates into dust. I'm going to give Ms. Kate a pass here on the whole women's-self-actualization-kills-you bit. But think Groundhog Day with a dark twist. However, this time around, thanks to Luce's hipster/dipster parents, Luce was never baptized. So when the big reveal comes from Daniel, Luce stays put. Huh? Weird. Then all the other students at the school come forward as angels either for or against Daniel and Luce being together.

It sounds a lot better than it really is. Fallen clocks in at a hefty 496 pages. But nothing happens and Ms. Kate falls so short on building desire and urgency between Luce and Daniel that it just comes off as sweet and boring. Nothing makes any of the characters unique. Sure, some of them are angels, but come on! Angels are supposed to be sweet and loving! Also, so many scenes smack of Twilight that it became yawn-inducing because of predictability.

Fallen looks like a dark tale of heaven's cast-offs and the poor human girl who got stuck in the middle. Really, it's just a stale modern teen romance where “angel” was put in to describe characters instead of “quarterback” or “nerd.”