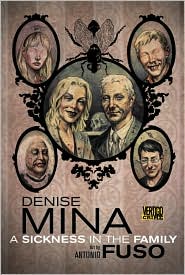 The Ushers are a family in decline. Mother Biddy’s having an affair, William’s just been kicked out of Oxford, Amy’s waging a battle with their father over his refusal to invest in her architecture firm, Sam, the adopted son is never allowed to forget that he’s not “one of them,” and then there’s Grandma Martha.

As they settle in for Christmas dinner, the Ushers listen as their downstairs neighbors beat each other to death. Literally. However, this doesn’t deter the Ushers from their petty family bickering over the Christmas pudding. Only Sam is moved enough by the screams emanating from the downstairs apartment to investigate. By that time, however, he’s too late.

Ted, the patriarch of the Usher family, uses the neighbor’s untimely demise to reclaim that basement apartment and promptly knocks a giant hole in the floor to make way for a grand staircase. It’s that hole in the floor that leads to the fall of the house of Usher (control your eye roll).

One by one the Ushers start to have brushes with death and eventually begin to die off. As the family unravels their darkest secrets are revealed.

Yeah. This graphic novel, A Sickness in the Family, by Denise Mina with art by Antonio Fuso just didn’t work for me at all. I can’t tell if it was a failing for the book or the reader. I’m not a fan of the mystery genre and some of the mystery tropes used in the book left me cold.

All the family secrets are revealed suddenly and felt very Deus Ex Machina-y. Like all this bad stuff was going on and then it was all, “Surprise, didn’t you realize X had a serious drug problem?” Duh. “Oh yeah, did we forget to mention that Y is a maneater?”

I suspect these kinds of revelations are a common trope of the mystery genre, which explains why I don’t read a lot of mysteries. To learn these kinds of things late in a book made me feel duped and mislead. Had I known these depths lurked in the characters, I might have enjoyed reading this a little more.

As it is, I did not like A Sickness in the Family at all. When the Ushers start dropping like flies, it’s hard to muster up any sympathy or fear or anything remotely close to caring for them. Why’s it so hard? Because the book opens with the family idly listening as their neighbor is beaten and murdered. Not a single member of the family can be bothered to come to the help of a woman who is screaming for her life.

The art here didn’t help matters. While I can appreciate that it was going for a sort of noir-esque feel, it just felt muddy to me and made it hard to discern different characters.

This is one of those book that if you’re into the mystery thing you might really dig, probably because you are comfortable or enjoy many of the conventions of the genre. If you aren’t a mystery fan, I’d skip it.