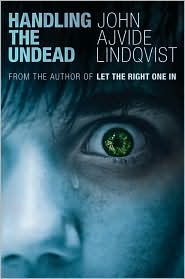 This probably applies to even things that are not Swedish zombie novels. Consider what it is, instead of what it isn’t and isn’t meant to be. I think I heard that on “Top Chef,” which seems a little think-y for reality TV.

In the case of Lindqvist’s follow up to the re-imagined vampire business Let the Right One In, I was so impatient waiting for these drooling, limb-lugging corpses to start a revolution that I almost missed out on the actual story, which is just a tad bit endearing. Stockholm, 2002, and in some sort of freak-of-nature glitch, the bodies of people who have died in the last two months come back to life. Well, life-ish. They can’t really talk, and some have severed faces and extremities, but they have clawed their way out of graves and walked out of morgues.

The most bizarre case belongs to David, a comedian whose wife died minutes before this un-deading. She sits up in her hospital bed, half her face missing and the medical clamps affixed to her innards are all a’jangle. She is so freshly dead that she still has the ability to mimic language, despite mostly being a shell of a human.

Mahler is a grizzly old retired newspaperman who gets the scoop on the story from one of his old connects at the hospital. He heads to the morgue for a first-person account of this unbelievable phenomenon, then jets off to the cemetery to dig up his grandson Elias.

Elvy, an elderly religious sort with strong telepathic powers, is a little put off when her dead husband shows up and resumes his place at his desk, rifling through paperwork. She and her granddaughter Flora — who is similarly telepathized — have him removed and sent off to live with the others who have been collected by ambulances throughout the day. Elvy wants nothing to do with her late husband, and reminds herself that she said “Til death do us part,” and technically, he is dead.

The novel follows these characters as they respond to the scenario in which a loved one for whom they were still grieving comes back, rotted to back-of-the-refrigerator and lunch-bag-left-in-car levels, filled with gases, lacking even the most basic human abilities. For David, it means lying to himself and his young son. Preparing for his wife to be well enough to return home. For Mahler, it means hiding Elias from the government sanctioned holding cell for the “re-living,” as they have been coined by the politically correct spokespeople. He bathes the child, moisturizes the hell out of him, and invents a salt water concoction for Elias to drink. Elvy gathers her peers and prepares for the end times, gets a little Jehovah’s Witness with her neighbors. Flora, a retired cutter in a Marilyn Manson T-shirt who kicks it old school with a walkman, wanders around wondering what it all means and hangs with her boyfriend, a squatter who pisses into a bucket.

I shouldn’t have been surprised that these weren’t kill-kill-kill BRAINS! zombies, considering the way Lundqvist whipped up a version of vampire that can easily adapt to either the “he” or “she” pronoun. A little sweetheart whose perverted keeper does the killing for him/her. A never-aging and oft-naked little bugger who captures the heart of an awkward and unliked neighbor boy in his previous novel-turned-movie.