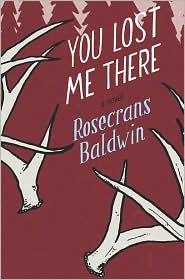 My very special gentleman friend has this thing with the last third of movies and books. Usually he hates them. Probably would rather have the ending lopped off, than nose dive into a suck pool. Especially in the situation of a really, really, really good first two-thirds.

I had that in mind as I neared the ending of Rosecrans Baldwin’s debut novel You Lost Me There. I considered closing the book. Sealing it. Shelving it. Letting the story end where I wanted to end, instead of where Baldwin wanted it to end. I wasn’t convinced that he had it in him to maintain the loveliness of the book to the final page. And by dammit, I was right. Spoiler alert: Fizzle-fest.

This post was supposed to be a love letter to those books that come around, and everything in the universe is working in unison, and suddenly you have the hots for a collection of words but no idea why. This one has got a strong science plot line, that includes actual science words. It’s not an addiction memoir, or Japanese horror. The words won’t lull you into a dreamy Murakami coma. It’s just really good. A pleasant place to live for eight hours. Or should I say, the six-ish or so hours before the story just dissolves. Such a shame. A damn, damn shame.

Dr. Victor Aaron, a pretty decent scientist researching Alzheimer’s Disease, is a worker bee whose wife, Sara, died a few years ago in a car accident. Things were a little blotchy in their relationship at the time. She was a playwright slash screenwriter with a solid flick on her resume. There was a trial separation, and also a trip to a couples therapist, who assigned a writing project: List the five benchmarks for where this relationship took a turn.

Victor disses the assignment, balks at psychiatry, but later finds her cards which reveal that her memories of their marriage deviate from his own. Confusing times for a biggie in the brain world, who specializes in memories. In the meantime, he’s got a handful of ladies in his life, and he isn’t pulling his weight in any of these relationships. There is a sassafrass young lady who spends Friday evenings performing burlesque shows for his personal viewing, and a gossip-y, smoking, drinking old bitty he eats dinner with on Friday nights. His lab parter is flailing around with big questions about love. And, later, his goddaughter moves in for the summer.

But, dude. He’s coasting. Doesn’t realize that the young burlesque dancer is developing real feelings for him, and he is accused of being inconsiderate by the old dinner partner. Poor lab partner is frustrated; He embarrasses the hell out of the goddaughter, a sort of confusing character who seems inches from leaning Lolita.

And those darn notecards are haunting him.

Victor is a toughie. His motivations, or lack thereof, are frustrating. But Baldwin has mastered the art of the supporting role: Everyone around him is a real pleasure. These two components work really well together.

But there isn’t a climax, which is interesting because Victor himself can’t finish. So unfortunate, since there are so many nice thoughts on love and loss and memory and relationships.

If I had it to do again, I’d have followed my instincts with this one and ditched out on the book toward the end, before it ditched out on me. I’d have written the love letter about those certain something books.