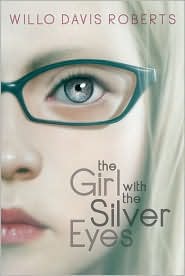 For about 30 of my 38 years here on Earth, I’ve been convinced that I read Tiger Eyes by Judy Blume. I read a lot of Judy Blume when I was a kid. Who didn’t?

Whenever people would mention that their favorite Blume book was Tiger Eyes, I’d eye them a little warily. Really? I’d think. I’m all for moving toast through the air with your mind and all, but come on! Telekinesis is no match for Farley Drexel Hatcher (aka Superfudge).

Then, last month, the story about Tiger Eyes being made into a movie hit the Internet and everyone was drooling about how awesome this just might be. When I read about the movie and saw nary a mention of telekinesis, I began to get a little suspicious.

Turns out I’ve never read Tiger Eyes. Instead I read Willo Robert Davis’ The Girl with the Silver Eyes. Silver eyes and Tiger eyes are not the same thing, in case you were wondering.

Of course I had to re-read the book to see why it stuck with me so much all these years, so much that I had assumed it was a Judy Blume book because those are the ones that stick the most (along with Beverly Cleary).

The girl with the eyes is nine-year-old Katie Welker who is a peculiar girl who loves to read and turn the pages of the book without actually using her hands. In fact, Katie was so peculiar that her parents dumped her off on a crotchety old Grandma for the past six years. Seems ol’ Granny was pretty sure Katie was some kind of a witch and would often lock her in her room.

When the book opens, Granny has died after taking a tumble down the basement steps and Katie is off to live in an apartment in the city with her estranged mother.

Katie’s none too thrilled with any of these developments, though she never expresses too much sadness over the loss of her grandmother or too much resentment to the mother that abandoned her. Instead, Katie focuses all her energy (psychic and otherwise) on alienating the babysitters her mother hires and annoying the mean guy who lives in the apartment building. She manages to make a friend in old Mrs. Michalmas who lives next door, and even reveals to Mrs. M her telekinetic powers.

This is all well and good until the handsome, mysterious Adam Cooper moves in. It seems Adam is skulking about asking the other apartment-dwellers questions about Katie. Their answers range from she’s a dangerous nuisance to she’s a harmless kid. Katie’s weirded out by Mr. C and wonders what he’s up to.

Along the way Katie’s mother tells her a bit about the past and how when she was pregnant Katie she worked for a medical manufacturer that made some kind of crazy dangerous headache remedy that was eventually pulled off the shelves because it was causing strange side-effects. Katie learns that her mother worked with three other women who were pregnant at the same time she was.

Being a smart kid, Katie decides to seek out these other kids and see if they have the same powers she has. Not a moment too soon either, because she’s also convinced Adam Cooper wants to arrest her for the murder of her grandmother.

The book follows Katie as she seeks out the other kids and eventually ends in a showdown with Cooper.

While the use of the word peculiar four times every other page drove me a little nuts as an adult, I can see why this book appealed to me so much as a kid. A weird, girl who wasn’t like other kids and she loved to read books? Sign me up! Plus, I was obsessed with telekinesis when I was younger (I think that was due to my love of Samantha on “Bewitched”).

This is one of those books that isn’t quite as enjoyable to read as an adult. I was more concerned about the death of Katie’s grandmother and how her parents abandoned her for being weird than anything else going on in the book. The adults are so awful and Katie so forgiving that I was a little upset about it. In fact, at the end when there is a lot of pathetic monologuing by the adults about what’s “best for Katie” I kind of wanted to punch them all in the face because for the first nine years of their life none of them gave a shit.

Still, I bet an eight-year-old would think this book was awesome. It’s a little intriguing and mystical with a sort of happy ending that would make kids feel good.