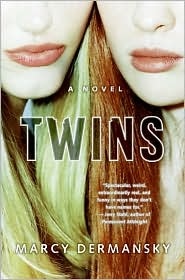 There’s a certain kind of glee that comes in discovering that the new writer you’ve recently fallen in love with has another book you can read. We need a word for this. When I was eighteen and first read John Irving’s A Prayer for Owen Meany I nearly crapped my pants with joy when I realized he had six other books I could read. Wahoo!

I was pretty close to pants-crapping-excited when Marcy Dermansky’s Twins landed in my hot little hands. I loved Bad Marie (so did Christa), and to have another book she’d written to read so quickly made me ecstatic.

Here’s why Dermansky’s books are so damn good: She has the ability to create real, flawed characters you care about and then puts them in imminent peril. It’s so awesome.

In this book we’ve got Chloe and Sue a set of beautiful, blond, identical twins. Sue’s a little bit, erm, obsessed with the twiness of twins and longs to be the only person in Chloe’s life. She’s also a little bitter because Chloe was born first, got the good name, and is an eighth of an inch taller.

Chloe resents the hell out of Sue and her possessiveness. On their thirteenth birthday Sue cons Chloe (and the local tattoo shop) into getting tattoos. Sue gets Chloe’s name and Chloe gets Sue’s name. This is only the beginning of Sue’s emotional manipulation. The harder she clings the more Chloe longs to escape, counting down the days until she goes to college and can get away from her weirdo sister.

Sue’s got some issues. She’s violent with Chloe’s one friend, develops an eating disorder because she’s afraid of getting bigger than Chloe and making them different, and well there’s the strange obsession with her sister.

Chloe’s no bag of sunshine either. She tries so hard to normalize Sue’s oddness that she seems to lose her personality. Trying so hard to appeal to everyone she becomes a sort of bland, boring, bag of neurosis. That is until she flits off to Hawaii with her one friend, Lisa, and Lisa’s family. There Chloe strikes up a friendship with Lisa’s father a former pro-basketball player.

Things get worse for the twins from there. Matters aren’t helped at all by their flaky, but rich parents.

Just like in Bad Marie, Dermansky has imbued the twins with flaws that alternately make you love or hate them, depending on the situation. Throughout the book I was constantly changing my twin-allegiance, but what never changed was how much I wanted things to get better for the girls. Why? Because I actually cared about them. I cared about them so much that when the book finally drew to a close I turned into a blubbering mess.

This is a good’un. You can get it on Amazon right now for $8. It’ll be one of the best eight bucks you’ve ever spent.