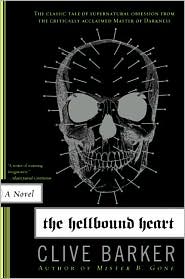 Where was my head? I spent the Halloween season searching for the ghostly and gruesome without ever once considering the work of Clive Barker. Then, one night, we landed on the Sy/Fy Channel in time to catch a wonderfully gross movie based on one of his short stories. Eyeballs popped out of heads. A meat hook blow was delivered to a crotch. Bodies were hung and bled like sides of beef. I cackled and gagged. Sometimes simultaneously. And then cracked into Barker’s The Hellbound Heart, the horror novella behind the Hellraiser series.

The story starts with Frank, an adventure seeker and pleasure addict. He comes to own this puzzle box, and when he finally solves it and gets it open, he unleashes the Cenobites, these devilish sadomasochists who amp up his senses to the extreme. It’s all briefly good, then torturous. He, to put it in Barker-ian terms, spills his seed on the floor of the bedroom in his grandparent’s house where he has performed this ritual — which includes a urine sample on an altar.

Frank’s brother Rory and his wife Julie move into the old place. Julie has residual hot pants for Frank after a sexy encounter involving her wedding dress that happened just before her big day. When Rory gets a gusher in the room where Frank disappeared, blood spills in the spot where Frank’s seed landed. Through some sort of lusty instincts, Julie figures out that a malformed Frank is hidden in some alternate realm, present in this room, and needs blood to regain his human form. So she helps a playa out with the use of liquor and seductive glances at lonely businessmen. Knifing ensues.

First of all: This book is so hokey and it is written in this kind of archaic way that is heavy and embarrassing. But damned if I didn’t have a snicker about to burst for the duration of the story. This is also delicious horror-flavored candy. It’s like ODing at the Junior Mints-Lick ’em Aid-Nerds buffet.

The proximity of this harem aroused him, despite circumstances. He opened his trousers and caressed his cock, more eager to have the seed spilled and so be freed of these creatures than for the pleasure of it.

“He was dimly aware, as he worked his inches, that he must make a pitiful sight: A blind man in an empty room, arousef roa dream’s sake. But the wracking, joyless orgasm failed to even slow the relentless display. His knees bucked and his body collapsed to the boards where his spunk had fallen.”

Not if it suits you,” he said and clamped his mouth over hers, his tongue frisking her teeth for cavities.

This shortie falls in the maybe not necessarily good-good, but wholly entertaining. There is a cleverness to this style of story, where demons are built from scratch, and your next-door neighbors could be carving up pasty white dudes in the master bedroom. I like the ease with which the characters sign on to the idea that certainly the problem is one of a paranormal nature. I believe there will be more Clive Barker in my little life.