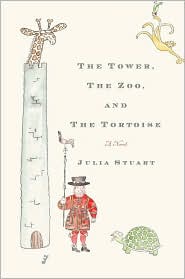 Julia Stuart's The Tower, the Zoo, and the Tortoise is completely charming.

Balthazar Jones is a beefeater, a popular nickname for the guardians of the Tower of London, though beefeaters in present-day London aren't as much guardians as they are tour guides and pickpocket catchers. Balthazar isn't the best at catching pickpockets. He'd rather be staring at the rain wondering whether he should add it to his growing rain collection despite his wife's protests.

His wife, Hebe, doesn't really like living in the Tower of London, where all beefeaters and their families live, and ever since their son died she started disliking it even more. She spends her days trying to connect lost items to their owners in London Underground's Department of Lost Things. A magician's box, a false eye, dozens of wheelchairs, an urn of ashes, and Dustin Hoffman's Oscar statue are just some of the odd things they find.

Balthazar’s rain collecting and his wife's occupation are charming enough, but all the smaller characters continue to add to the charm.

London Underground's tattooed ticket inspector is also in love and continually brings lost items, which aren't really lost items, to the Department of Lost Things in an attempt to woo Hebe's co-worker.

Sir Walter Raleigh's pesky ghost, a man with a bad memory who thinks he's always losing something in the London Underground, and a cranky beefeater who mimics the attitudes of the ravens he cares for, all add to this whimsical story.

It really is so charming it hurts.

Of course the story is more than a collection of crazy characters. Balthazar, a good caretaker to a 180-year-old turtle, has been asked to manage the queen's collection of exotic animals which are moving into the Tower. Although the penguins go missing, and the animals cause problems when they're set free by an angry beefeater, overall Balthazar thrives at handling the animals. He seems to give his love and friendship to them, more so than he does to Hebe.

Balthazar and Hebe have been dealing with the death of their son in different ways. Balthazar feels guilty and doesn't want to talk while Hebe doesn't understand his silence and lack of tears. The loneliness they both feel mirrors some of the loneliness others feel, including some of the animals.

The story of their son's life and death unfolds slowly and perfectly. Had I known earlier how their son died and why Balthazar felt guilty I wouldn't have cared as much as I did after I got to know these characters.

I really can't say enough about this cute novel. I love the characters and the story of parents grieving over their son’s death didn’t turn this into the kind of drama-filled tearjerker that could be made into a bad Lifetime movie. While there is grieving, this is definitely not a Jodi Picoult-esque book that I would’ve stopped reading by page 40. All of the characters and the crazy shenanigans really make this whole story lighthearted and sweet and I loved it.