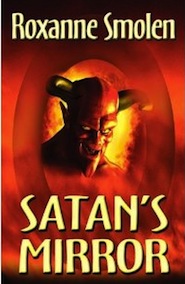 Emily Goodman is a former reporter who now travels the country hosting a reality TV show. Her job is to seek out paranormal activity and expose it for the fraud that it is. Her record for figuring out how-it’s-done is perfect until she’s sent to investigate Satan’s Mirror, a mirror where (rumor has it) one can conjure up the devil. Unbeknownst to the victim (until it’s too late) the mirror works both ways. Demons can also reach out and grab the human. It turns out that Hell is not where the wicked go after they die, but rather a resort where demons from another dimension go for vacation. And what do they do while on vacation? Kidnap humans through Satan’s Mirror and feed off their pain and terror. The devil is more a proprietor working to keep his guests happy than the Lord of Darkness. It’s a nice setup until they kidnap April, Emily’s six-year-old little girl. Then the fun really begins as Emily enters the portal and goes to Hell to rescue her daughter.

Emily hurtled down hell’s gullet. Light exploded with the force of a nuclear bomb. Through closed eyes, she saw flames. She smelled flesh burning, hair singeing. She imagined her limbs incinerating into ash, imagined her eyeballs bursting.

The blistering wind peeled back her lips. She clamped her jaws against it, feeling an unvoiced scream rip her throat. Writhing and contorting in endless agony, she fell through the bowels of the underworld.
p.174

Roxanne Smolen puts a new and creative twist on Hell. Sure there’s the favorites like the lake of fire, but she adds new touches with dead trees that aren’t exactly dead and absorb humans, acid rain (literally), along with some other goodies which I won’t give away. The characters are solid but I would’ve liked to have seen a little more back story on a few of them, especially Ross, Emily’s boss. Smolen did a good job of suspending disbelief although at times I found myself questioning Emily’s stamina as she raced through Hell. I guess I can chalk it up to a mother’s love for her daughter.

Satan’s Mirror is quick paced and can easily be read in one or two sittings. The chapters are short so if you’re in a time crunch, there are a lot of good stopping places. Some scenes are a bit graphic, this ain’t Alice through the looking glass, but overall I’d say young adults will enjoy this book as much as adults.