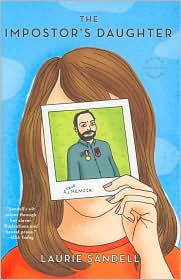 When Laurie Sandell, if that is her real last name, was growing up, her father would have the mail stopped every time he went out of town. If, by some twist, Laurie did get her hands on the delivery, she would find envelopes addressed to all sorts of people she had never heard of.

The Impostor’s Daughter by Laurie Sandell, a chronicler of celebrity stories and editor at Glamour, is a graphic memoir recounting a childhood spent with a mysterious father who has larger-than-life stories of honors, awards, medals, and elbow rubbing. Sandell, his favorite of his three daughters, is always trying to please him, and likes to leave little funny drawings for him to find. As she gets older, and they disconnect a bit from their original clique, she starts to question the truth in the fantastic stories he has told her. Does he work for the CIA? Who is this guy? And why in the hell did he open multiple credit cards in her name, and completely demolish her credit score before she’s ever even pursed her own plastic?

She begins investigating her father, with plans to write an article for a magazine about his life and lies. At first he is totally game. He spends hours with her talking about killing people and almost being killed and jail time and the biggie bigs he’s called friends. She records these sessions, and then starts fact checking. No, he didn’t graduate from that university. No, he never worked there. Looks like he borrowed a shitton of money from a family friend, never paid it back and ruined the chance for future dinner parties. And he is wracking up some serious debt. Her mother, meanwhile, ignores all of this. Continues to give him, as she says, the benefit of doubt.

As a journalist, I’m not sure why Sadell went the illustrated memoir route. She can obviously write, she’s a professional writer. Her drawings are more from the spare and realistic vein, and they are fine. She doesn’t take advantage of the panel space. No extra details. No hidden jokes. No foreshadowing or clues to the time period the story is set in. It’s a bit of a waste. Especially in the case of this story: Dude, her dad is a total fraud. And as she investigates his claims, he appeals to her emotionally with reminders of family loyalty and vague suicide threats. This is compelling stuff that could have been an epic, if not award-winning, word book. It’s a total page flipper, even for its faults.

The side stories, too, seem to strip away some of the skin from the meat of all of this. Sandell inserts her relationship with Ben, a guy she meets online with whom she develops a long-distance relationship. It’s a lot of mixed emotions, on again off again, and I believe it is meant to illustrate the point that: Look. My dad fucked me up so big time, that I don’t even know what I want with this nice and normal dude from California. She’s also building up her tolerance for Ambien and mixing it with wine. And then there are these celebrity interviews that land her across the table from the fluffy haired and sunglassed sect. She’s clearly enamored with her job among the rich and famous, which she explains by noting the way her father’s larger-than-life stories have made her crave larger-than-life, oft-photographed super people. Unfortunately, paired with a drawing of all the celebs she has interviewed, it seems unprofessional and name dropp-y. (Ashley Judd, for instance, is one of the supporting characters in the story).

There is just so much potential here with the base story, that was all whittled away because of some bad decision making about delivery. I wish she had a do over.