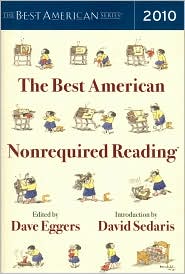 This series is the dim sum of anthologies. Short stories, lists, magazine articles and snippets of graphic novels are chosen by two groups of high school students. Where did they get such good taste at such a young age?

The Nonrequired Reading edition of the Best American series is released annually and edited by Dave Eggers. The proceeds go toward 826 National, a program that Eggers started. This is where the high school students come in. 826 National is, as stated on the back of the book, “a network of nonprofit writing and tutoring centers for youth located in eight cities across the U.S.”. Any program that does this for free is pretty ambitious and cool, and it’s run entirely by volunteers. Buying this book is a great way of supporting the program and it’s a good read.

The way the stories and articles are chosen is the subject of a very entertaining editor’s note. Then David Sedaris pipes in with his introduction. After this comes the “Front Section” which contains such humorous but entirely true lists such as “Best American Fast-Food-Related Crimes,” “Best American Farm Names,” and “Best American Woman Comedy Piece Written By a Woman.” Funny stuff. But then it gets serious.

My only complaint with this collection is how many depressing war stories are included. The pieces could be considered necessary, but unrequired, reading even though they just bummed me out. If someone was looking for, say, “Chicken Soup for the Pet Lover’s Soul” they won’t find it here.

One of my favorite selections is a depressing one though. In “Fed to the Streets” from LA Weekly a rookie EMS ambulance driver chronicles some harrowing experiences. George Saunders, one of my favorite writers, charts out a map of a tent city in “Tent City, USA” from GQ. Andrew Sean Greer’s “Gentlemen, Start Your Engines” changed my negative opinion of NASCAR and its fans. One of the most publicized articles in the past year, “Vanish” from Wired, in which Even Ratliff tries to go underground to see how long it takes for someone to find him in today’s over-connected world, is included in this anthology.

If you’re looking for a thought-provoking read that suits your ADD just fine, or if you want to volunteer for 826 National but can’t, go out and buy this book.