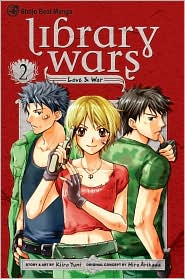 Library Wars: Love & War, Volume Two will be the last volume in this manga series by Kiiro Yumi that I will read. I was hoping it would be better than the first, and it was, but barely.

This volume picks up where the last left off with Iku's training in the Library Forces, or more specifically the Defense Force section of the Library Forces. This is the force that fights against the federal government's attempts to censor books from local libraries.

A conspiracy and battle between the Defense Force and the federal government soon follow, and I really wish this part of the series were more prominent. The federal government, blaming all of society's ills on certain books, tries to remove materials by force from libraries, but not if the Defense Force can stop them. Gun fights in the library, the media turning on the library's refusal to release criminals' library records, and dissidents within the Library Forces are really entertaining to me, but I wish it were fleshed out more. Or is this just how manga is? I'm not a manga reader, so does it always move so quickly through scenes?

Maybe they moved quickly through these scenes because they had to get to the love part of this story, which fills up most of these pages. In this volume it's more of a love triangle, but of course the love-hate angle is still strong. Both men in the love triangle hate Iku on some level, but both also love her. They're just mean to her when they're in training and on the battlefield because they're trying to protect her. Barf.

The Library Forces and the fight against censorship is something that would definitely draw me to a series, but, just like the first volume, this series is much more about love than war. I won't let the Library Forces cloud my judgment anymore because these are really just crappy romance novels.