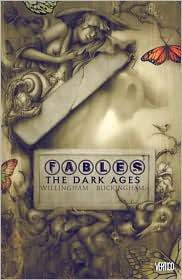 It’s hard to talk about the first twelve volumes of the Fables series for two reasons. First, it’s fraught with spoilers. To mention what happens in, say, volume 6 might spoil the shit out of what happened in volume 4. Second, talking about Fables with the uninitiated makes you sound a little, well, stoned.

I tried to review the first three volumes and failed miserably. So why am I even trying again? Because this series is so good. SO GOOD!

When it comes to comicbooks or graphic novels, I’m not a huge fan of the superhero genre. It’s not to say that I don’t enjoy a good Superman yarn once in awhile, or a nice tale about the Dark Knight, but as a whole, it’s just not for me. There’s just so much backstory in superheroes that whenever I read them I always feel like I’m a little bit out of the loop.

But with Fables, I’m familiar enough with the backstory of Snow White and Cinderella and the Frog Prince and the Big Bad Wolf that I was comfortable right from the start. Plus, there’s just something intriguing about fairy tales living among us. So instead of a proper review, I’m just going to list a few of the reasons I am loving the Fables series.