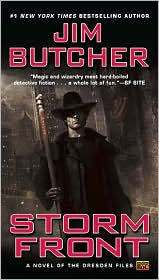 It is a normal day in the life of Harry Dresden, professional wizard specializing in locating lost items and paranormal investigations. Rent is due on both his small, dungeon-like apartment and office space while food is scarce and work is even scarcer. As luck would have it he catches a case working with the local police department as a contract “psychic” on a grisly double-murder.

What Harry finds is not a standard murder investigation ? but a powerful use of black magic that caused the hearts of the two victims to explode through their chests. Before you can say “bubble, bubble, toil and trouble” ? more people begin dying in the same fashion and Harry finds himself launched into a dark world of organized crime, vampires, black magic, fairies, and conflict with The White Council (the governing body for all wizards).

In the middle of all this chaos is an illegal drug called “The ThreeEye” that causes you to hallucinate and see things in their “true form” ? whether that form is demonic and evil or pure and holy, it never leaves you and people are starting to lose their minds. It takes battling demons and black mages while trying to not get arrested by the White Council or eaten by vampires for Harry to finally put the pieces into place and stop the man that was unleashing this terror on his city ? before he becomes his next victim.

The brilliant thing about Jim Butcher is that the story is believable and the characters as so well developed and balanced. I mean, lets face it ? this story line could have turned out really bad. I think the reason this series is so enduring is because Harry is just your average guy that has this great power, but can't even use the phone or own a fridge (why, you ask? Read the book. . .). The magic is summoned from the energy around us ? simple physics, as the book repeatedly reminds us. He demystifies the life of a modern day wizard by humanizing it and making it make sense.

The characters that we are introduced to in the first novel play a substantial role throughout the series. Karrin Murphy, the Chicago PD lieutenant that looks like a cute, blond cheerleader but carries a semi-automatic weapon and a black belt in Judo. Susan Rodriguez a reporter for the local sci-fi paper the Arcane. Johnny Marcone, an underworld mob boss with a dark secret and a heart. Morgan the anal retentive White Council guard out to get Dresden. And of course, Bob, a sarcastic spirit of knowledge that inhabits a human skull and loves trashy romance novels. I can’t forget about Toots, Mister, the Blue Beetle,…

My obsession with The Dresden Files began similar to how I've heard many describe it… “Oh, I'd heard about it but it took me a long time to finally pick the books up”. For me, it took three years to finally start the series and I became instantly hooked ?reading the entire series in six weeks. There are 12 books in the series plus a few supplemental graphic novels and the occasional short story. Book #13 titled Ghost Stories is set for release in April 2011.

But, enough about me and my obviously unhealthy obsession with a fictional series. . . go out and get a copy!