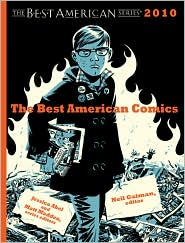 It has been three months since I fell in love with the young slacker Scott Pilgrim, and what a whirlwind these three months have been. In the aftermath of Book 6 of the series I tore through in cackling maniac mode, I’ve gone loco for pictures with words, captured in panels. I haven’t felt this curiosity and newness and excitement toward, well, anything in years. Dude. I’ve even started drawing. And if that doesn’t say something . . .

“I wish I could direct this much enthusiasm toward, I don’t know, learning Spanish,” I said to my boyfriend as I tried to scribble an approximation of Jamie Lee Curtis holding a single serving of Activia. The page looked like I planned to start snorting eraser dust.

(This manic hobbyism is getting in the way of me a) reading novels comprised 100 percent of words; b) writing sentences, both fiction and nonfiction).

Right now I’m in a period of discovery. Figuring out what I like, and what falls into the more meh category. Best To that end, Best American Comics 2010, edited by Neil Gaiman, was a pretty sweet sample pack that helped me build a bigger faves pile.

As with any Best Of series, there is going to be a range of material. My rule going into this one was similar to negotiating a holiday meal: You must sample everything; Finish what you like. This means I didn’t spend a hell of a lot of time weeding through robots and distant planets. But of the 25 comics in this book, I totally dug a handful and a half of them. I added a few websites to my Google Reader and a few collections to my Amazon Wish List.

Here is what I consider the Best Of from the Best Of:
Gabrielle Bell, who kicks it autobiographical. The entry in this collection, a quick hitter about escapism through reading, is nice. The material on her website, however, is the coolest. She’s very thoughtful in what she makes. I haven’t stopped thinking about this since I read it.

James Kochalka has like 20 mini slices of life comics. He is 60 percent responsible for me picking up a sketch book. In the biographical info notes, he says that he has been drawing a comic a day since 1998. The ones in this book are sweet little stories about his kids and wife.

The excerpt from The Alcoholic by Jonathan Ames and Dean Haspiel is the story of 9/11 and the confusion in the days that followed. Including the character’s next door neighbor, a woman with a baby, and a husband who never came home. (Ames, of course, is the writer behind the super awesome show “Bored to Death.”)

The most surprising like from the bunch was an excerpt from David Mazzucchelli’s Asterios Polyp. The title character’s life is revisited, including a scene where he charms the shit out of a bunch of people at a party, and then falls for a hard-to-read woman.

Derf’s entry is a story of the punk scene in a small town. At one point, a bouncer and members of The Clash slash the tires on Journey’s tour bus. Hilar. This one led me to his website where there is an excerpt from an autobiographical story of how he was friends with Jeffrey Dahmer when they were growing up.

I dig the concept of the stuff by Jesse Reklaw, who draws scenes from submissions of people’s dreams.

Fred Chao’s Lobster Run takes a sort of super hero feel, in a setting of realism. A young man is working as a dishwasher at a restaurant when a critic comes in an orders lobster — which they don’t have. He is sent out to a nearby restaurant to steal a lobster, and there is a fantastic chase scene. The resolution is the cutest.

Josh Neufeld takes a journalistic approach to Katrina aftermath for those who stuck around in New Orleans. This is also a hit.

Beyond this, there is an introduction from Neil Gaiman that sort of disses the concept of this series, but also advises readers to start drawing right now. Message received.