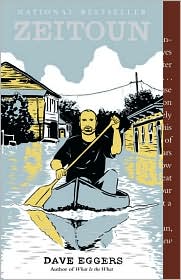 Over the course of the 300-plus pages of Dave Eggers’ journalistic narrative Zeitoun, the leading lad of one of my favorite self-indulgent, albeit delightful, memoirs became more than the guy who was almost on “The Real World: San Francisco.” Mind blown. Imagine having this ability to write, a mix of ambition plus passion, and an established name as a check to float while changing the entire world.

Whoa, Dave Eggers. Talk about using your powers for good.

Zeitoun is an account of the effects of Hurricane Katrina from the voices of the Zeitoun family: Abdulrahman and Kathy. The former, a native of Syria, the latter a Muslim convert he met in Louisiana and married. He is a successful contractor; She mans the phones and does the books. As the infamous hurricane is bearing down on their city, Kathy takes the kids and heads to Baton Rouge. Abdulrahman stays behind to watch the house and their rental properties. And when the levees break, first he uses a triage system to save their most-necessary possessions. Then he travels New Orleans by aluminum canoe plucking the elderly from second-floor windows and feeding the dogs that were abandoned when the owners fled.

In his travels he observes rowdy looters and finds a few friends who also stuck around through the storm. He finds an old woman, her dress billowing in the water, who is floating near the ceiling of her house, clinging to a bookcase. He starts to feel pretty good about being in this place and helping these people. While making his daily phone call to Kathy at one of his rental properties, some officials bust in on the house and arrest Abdulrahman and his three friends. They are accused of being terrorists and of stealing, even though they are in a home he owns. They are strip-searched and thrown into first a makeshift prison at the Greyhound station, then a maximum security prison. Abdulrahman isn’t given a phone call or any way to let Kathy know what has happened. No lawyers. No treatment for illness or injury, and no respect for his religion that doesn’t allow for pork.

This super real story that happened half a country away reads like a science fiction true crime nightmare of epic government incompetence. Not to mention it is an incredible feat of writing.

This is exactly what made me dig Susan Orlean in the early 2000s-to present day and Joan Didion more recently. I like, and envy, a writer who can become embedded enough to tell the subject’s story including the big details, personality ticks, and the color of the walls. The billowing dress, for instance. The smell of dead animals. The water filling the living room and Abdulrahman emptying the family fish tank into it.

And Eggers paints the main character as this mix of 100 percent loyal and hardworking, but also a stubborn man in a way that is heroic for the people he helped, but frustrating for his family — who just wanted him with them. Eggers also doubles back to give a voice to the people involved with arresting Zeitoun and his friends — which I didn’t expect, but makes everything before it even more well done.

I’m glossing over the fact that this is a stunning book that is impossible to talk about without getting completely frothed. And I’d imagine some people didn’t dare open it for fear of self-induced rage fueled brain explosions. But that just shows Eggers’ awesomeness. Instead of using his powers for cute turns of phrase and kitchy plots, he dropped a camera into the mud and gave a very moving account of something that most of us just saw on TV. Damn he’s good.