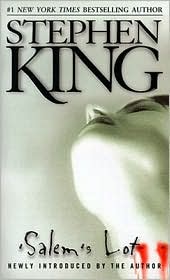 What does a player have to do to find a leg-numbing, breathing impaired, can-only-read-in-daylight-hours novel? It’s my second-favorite holiday season in the world-wide calendar, and I want this October to come with some g’damn goosebumps.

Something on the internet led me to something else, and eventually I landed on Entertainment Weekly’s website, where they had posted Stephen King’s intro to a vampire anthology, and in that intro he disses on the glitterific vamps skulking around in direct sunlight — the re-imagined blood suckers who, like, fall in love and eschew human throat meat. Somewhere in all of this, I was led to a description of his novel Salem’s Lot which described it as “truly terrifying.”

I had a copy in my hot little hands within a few hours, with big plans to regret reading this without adult supervision.

Backtrack: I read Pet Semetary when my fontanelle was still the consistency of tapioca pudding. I think “truly terrifying” would be a legitimate descriptor for an 11-year-old tucked into her bedroom in the basement, pulling some covert reading ops in the middle of the night. It has been 24 years, but I still remember when evil Gage severed an Achilles, and the imagined yowl of the post-dead cat Church. Yeeps. So I imagined that if someone in the world referred to Salem’s Lot as “truly terrifying,” it just might be true.

Don’t get me wrong. It’s a good little story. King’s second published novel, and one that was inspired by playing the “what if-skies” with his wife — like plenty of his novels are born, according to his book On Writing. In this case: What if Dracula made an appearance in small town America in the middle of the 1970s?

So . . . what happens when Dracula makes and appearance in small town America in the middle of the 1970s? Entire said small town starts getting picked off like items on a to-do list. A mysterious duo moves into a mansion on the hill that overlooks the entire town of Jerusalem’s Lot. A kid goes missing, then his older brother dies mysteriously. Soon babies, adults, drunks, law enforcement officials, and the dump operator start disappearing — and the sundown hours have become a dangerous place for someone who isn’t wearing a crucifix, or doesn’t have a few memorized Catholic prayers at the ready.

The only people who seem to recognize and accept what is going on are Ben Mears, a published author who is new in town, and his lucky lady Susan, a mediocre school teacher, and the town’s superstar general practitioner.

As always, King has a cute cast of lovable characters — whom he isn’t shy about offing. (Whatta dick). And a 600-pages, no big whoop story that is impossible to set aside. This is possibly my favorite Stephen King novel that I’ve read, in fact.

“Truly terrifying”? Truly not. But I don’t regret reading it at all.