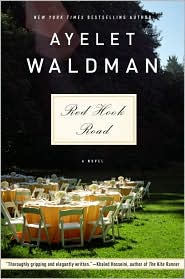 I come to you with, curiously, no complaints about Ayelet Waldman’s Red Hook Road.? I believe the fiery ginger has written her best novel to date, possibly the best novel she can write, and it is pretty damn good.

This is what literary limbo looks like. It’s a place where you read a book, enjoy said book, probably won’t try to jam it down anyone’s pants with a breathless “You. Must. Read. This.” But if anyone asks your opinion of the work, you will beam like a Glo-Worm, and maybe throw in an appreciative sigh. List 101 things you liked about it — the pace, the characters, the tone. It’s so neutral that you can safely pass it along to your mother as an emergency birthday gift with positive results and without being accused of only reading books about men who -ectomy their own leg bones to use as weaponry.

The prelude is a perfectly painted portrait of a wedding day. The party and extended family arranged for a photograph. And those minor hiccups that differentiate this special day from the special day of a kazillion other couples: the flower girl can’t find her flowers, the best men are hung over and still smell of a stolen toke or two. The father of the bride is wearing tennis shoes. The happy couple are childhood sweethearts — a boat builder and a decent violin player. Becky summers in this little town in Maine that her ancestors built; John is a townie whose mother cleans Becky’s family’s house. The photographs are taken, the guests move on to the reception and wait the arrival of the newly minted Mr. and Mrs. Tetherly. Instead, John’s brother Matt shows up, disheveled and crazed. He had been following the limousine. There was an accident. Becky and John are dead. Corpses in wedding ware.

The rest of the novel is divided into four chapters, each marking another year after the tragedy. It is a textbook of grief from different vantage points. Becky’s mother Iris, and her need to control her environment, John’s mother Jane, and her resentment toward these upper-crust meddlers. Becky’s sister Ruthie, a second-place sibling who throws herself into school, a trajectory similar to the one her mother took. She is unable to find closure or an outlet for her pain. Matt, who takes up John’s dream to rehabilitate an old sail boat with the intent of moving to the Caribbean and providing tours and leisure aboard the salvaged boat. (Then, later, falling into a super-secret relationship with Ruthie). Becky’s father, at mid-life, makes a return to boxing. Becky’s grandfather, an ancient violin virtuoso, finds it impossible to grieve after all the shit he has seen and people he has lost. He discovers that the flower girl, Samantha, has a ridiculous ear for music. He spends his time encouraging her gift.

The pacing of this book is perfect. As if Waldman — who’s virtual identity is that of a rapid-fire speaker, a no-nonsense loud-mouth (in a good way, IMO, but not in everyone’s), whose opinions fly out of her finger tips like silver bullets — took a deep breath and began slowly weaving a tale.

I would imagine there would be a tendency to be emotionally manipulative with the story. To really wring out the reader, and leave her cold-clocked and heaving. But Waldman takes the long way around the cheap route, finding middle ground between loving the characters, empathizing with them, but not bleeding the tear ducts dry. She handles the subject, grief, in a realistic way. While each of the characters has a different response, there is overlap in their emotions that keeps it from feeling false.

It is the last chapter, or Coda as it is called in the novel, that is … gross world alert … beautiful. It is the perfect finish for the story, one that doesn’t answer every loose end with a neatly gift-wrapped finale. It reads almost like poetry, or a self-contained short story, and packs a pretty big Wow.

Red Hook Roa might make my Top Ten of 2010, somewhere around No. 8 or No. 9. Mostly, it is a rainy day one-sitter when you just want to run your eyes over words, and emerge eight hours later satisfied.