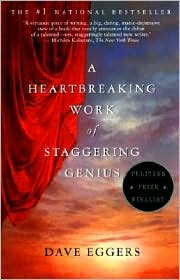 I read A Heartbreaking Work of Staggering Genius for the first time in 1999, and it went a little something like this: Pop rocks. Coke. Shake. Brain.

Dave Eggers’ memoir-with-benefits was this thing that totally changed my understanding of what a good book could be. So influenced was I, that it necessitated instigating a Top 5 Favorite Books list, where just having A Favorite Book, or Two Books Tied for Favorite Book, would no longer do. If I recall correctly, I ushered in Y2K with this as my answer to a question no one would ever ask me: 1. The Sun Also Rises (Hem); 2. The Great Gatsby (Fitzy); 3. A Heartbreaking Work of Staggering Genius (Eggers); 4. The Awakening (Chopin); and 5. The Edible Woman (Atwood).

In the past decade, I’ve never really monkeyed with that list. I could probably still defend my picks in front of a jury of my peers, although I can’t say I’d make the same list right now. But I wouldn’t make a list right now because I’ve probably read like 600-plus books since I was 24, and to sort them would be akin to having a freshly sharpened axe driven into my skull by the Strongest Human Being in All of the Land.

Every other book on that list had been subject to a re-read, and in some cases re-(to the nth power)read. But I dared not touch the Eggers again. Until now. My boyfriend listened to it recently, was chuckling over some Eggers family hilarity, then picked me up a copy from the library.

I expected this to be spiritual. Like eight hours alone in the attic of your youth, flipping pages of a yearbook and trying on the old letter jacket. If the song “Mambo No. 5” still smells like August on a highway cutting through Durango, Colorado to me, imagine the power of the words from one of my favorite books in conjuring up some residual 20-something bullshit.

The reading public’s introduction to the future Mr. McSweeney’s was this: The story about how Eggers parents both died of cancer within a few months of each other when he was in his early 20s, leaving behind an elementary school-aged blank slate for Eggers, etc. to raise. Dave and young Toph Eggers make a dynamic duo, technically a father-ish kinda-son relationship, that leans more big brother buddy and little dude.

Eggers runs a tight ship: No one swears around Toph. But they also consider the slide-ability of the hard-wood floors when rating an apartment. There is wrestling. There is Frisbee. There are massive freak outs when Toph has his first non-Eggers babysitter, or isn’t at the right door when Dave picks him up after a bar mitzvah. There are tender hair tousles, and cute insults. And the whole thing makes you wish that you had a supercool older brother who had taken you into his tutelage and taught you how to be hilarious. Or that you had your own blank slate to teach the trick involving the 360 degree spin before catching the disc.

In the meantime, it’s about being a 20-something in the 1990s and having friends, ideas, dreams, world domination fantasies, and connections to Adam Rich of “Eight is Enough.” Not to mention the fun cult ref drops like Vince Vaughn (Eggers went to high school with him), Puck and Judd from “The Real World: San Francisco” (Eggers was a finalist for a part as one of the seven strangers who would learn what it’s like when people stop being polite … and start being real).

Reading this book 10 years later is like reading one of those letters you write to yourself when you are a senior in high school. “Dear Christa … By now you have probably written a trilogy of bestsellers that not only have a strong mainstream presence, but are also critically acclaimed by book snobs everywhere.”

Except this is Eggers’ measuring stick. “By now you will do exactly what you wanted to do … create a website that appeals to literary sorts, publish a handful of novels, and have a sort of celebrity that is uncommon to people who work with words.” And now Toph is in his mid-20s, and highly Google-able for his own projects. Instead of a book about big plans, it is his to-do list, and he has done a remarkable job of emptying it.