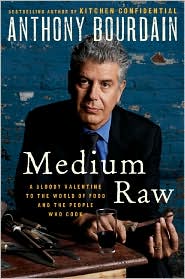 Food writers, especially good ones, are at such an advantage. They have every sense available to them, and if they know what they are doing, they have the opportunity to make a reader cavort and drool with their words.

Midway through the first chapter of the rock and roll food writer Anthony Bourdain’s super visceral Medium Raw: A Bloody Valentine to the World of Food and the People who Cook, I had a startling revelation:

It is possible that this droll former addict, he of the well-documented self-combustion, a man who has bitten into a dish on “Top Chef” and critiqued it as tasting like “doll heads,” is one of the — if not THE — best writers on the planet right now.

“I bring my molars slowly down and through my bird’s rib cage with a wet crunch and am rewarded with a scalding hot rush of burning fat and guts down my throat. Rarely have pain and delight combined so well. …With every bite, as the thin bones and layers of fat, meat, skin and organs compact in on themselves, there are sublime dribbles of varied and wondrous ancient flavors: figs, Armagnac, dark flesh slightly infused with the salty taste of my own blood as my mouth is pricked by the sharp bones. As I swallow, I draw in the head and beak, which until now had been hanging from my lips, and blithely crush the skull.”

His 10-years-later followup to the hugely popular Kitchen Confidental is a “what happens in the 10 years after a book is hugely popular” collection of, well, stuff. Part memoir, part essay, part fuck you, part trade magazine, part journalism, part rolling credits that say: Remember this character from my first book, well he (fill in the blank) now.

And there is the rub. Everything but the memoir, essay, and journalism is a lot too inside baseball. The best writer ever is also wildly inconsistent.

I’m curious about who he believes is his audience at this point. If it is the celebrity chef-bangers who coo over his raspy wit and salt-n-pepper hair, the nitty gritty about the heroes and villains of the food world just simply isn’t interesting. Sure, I can Google Alice Waters to see which pole I side with on this controversial character. Or I can skim my way through that chapter and silently plead that he tells another story about being stranded on an island with some entitled princess with expensive taste and $1,000 T-shirts. Or his suicidal whims, dictated by what song is playing on the radio when he drunk drives home.

If he’s writing for the line cooks who left grease marks and cigarette ash in the margins of a borrowed copy of Kitchen Confidential, I’m not sure that an essay on the meat industry is any more interesting to them than the half journalism/half first-person profile on David Chang of Momofuku is to the legions of men and women who just want to bone Bourdain.

He must be writing for the serious foodies, right? The one’s who are dying to hear about eating a specially prepared endangered bird. An illegal delicacy, set on fire seconds before it is served, and the way that eating it burns the mouth with drops of bird fat, the tiny bones making one’s tongue bleed.

But then, why not stick to that instead of all the other filler? Why a chapter titled “Alan Richman is a douchebag.”

I’m not sure where I fall. Wanna-be foodie, Bourdain fan-girl, aficionado of well-crafted sentences, mostly. And this self-described “bloody Valentine” opens with a scene akin to something out of “The Godfather.” A collection of heavies from the food underground have met for a super-secret meal of Ortolan, a finch-like bird and a protected species. He spends pages describing the bird, the ritual, the “just-fucked” look on the faces of the foodists who have shared the experience.

He follows it up with the tales of a newly-divorced bad ass subsisting on weed and booze on a tourist-free island. Every night on his way home, as he rounds a certain spot in the road, he makes the decision to live or to die based on what is on the radio. Spoiler alert: He does not kill himself.

When the writing bucks, the story soars and vice versa — although not always. When Bourdain gets into the rants and senseless “fuck yous” flung at people in the industry, it’s a little “Why don’t you just blog this shit instead of publishing it”-ish. It’s all a little disjointed, scattered, ADHD-erific. I’m gonna write about this! Now I’m going to write about this. Look! Fish! Why not make the Bourdain book about Bourdain? It worked the first time, right? And that’s the reason he even got the chance to write this one.