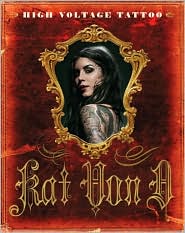 The punk rock tattoo artist who busted out of the super-vanilla “Miami Ink” for her own show — “LA Ink” based in Hollywood (next door to Edible Bouquets, ohfer cute) — is this fascinating gravitational pull. She looks like a Barbie doll that was attacked by an angsty “Rocky Horror Picture Show” art weirdo teen armed with Sharpies. And based only on the edited version of her life that appears on TLC, I’d say it isn’t hyperbole that she has “DILLIGAF” (does it look like I give a fuck) tattooed on her hand. She dated Nikki Sixx. She lives in something that looks like a mini Castle Grayskull. Her tattoo lair within the High Voltage tattoo shop is a dripped candle wax gothic cave, think “I Dream of Jeannie” meets Elvira meets Buffy’s exboyfriend Spike.

High Voltage Tattoo — her first book — is part celebrity memoir for the Tiger Beat-style fan, filled with photos and deets like Kat’s favorite songs and a few growing up photos. It is part How-To-Tattoo (don’t show up drunk!), part portfolio. It’s billed as a coffee table book, and shelved in the pop culture section of the bookstore. It’s got a padded cover, and worn-journal style pages — some that feature hand-written musings, sprawling script Kat. There is a foreward from Nikki Sixx, whom she dated for two years, which is the best written part of the book: “She’s definitely a top-fuel funny car, a superhero cartoon character with a tattoo machine firmly in hand 24 hours a day,” he writes.

Kat Von D didn’t reveal much more about herself beyond the bare bones biographical information that you could find on Wikipedia. Anyone looking for juicy juice would be better served by watching E! (She started tattooing at 14, dropped out of high school, ran away, ran back, married a Texan who has accumulated a body suit, loves her family).

There is also a multi-page full body spread, a tat-tour if you will, of the stories behind some of the countless markings inked into Kat’s legs, face, hands, neck …

People who watch “LA Ink” will recognize one of the final sections of the book as similar to the format of the show, where a customer walks in, explains that they want a portrait of their cat, then tell a real sob-story about how Fluffy was hit by a car. Although, in book format, the narrative takes a back seat to the art and so there isn’t a ton of emotion to it. These are just quick hitters about dead grandparents and drunken rock tours around Finland.

This isn’t a book to sit down and read, per se. But it is definitely worth taking a ton of time to flip through. The art, the actual reason for the season, is amazing (not just Kat’s tats, but also the photography by Lionel Duley), ranging from a watercolor Kat Von D painted when she was seven years old to the angel that took four sittings to perfect on Nikki Sixx’s ribs. Kat Von D is known for her black and gray portrait work, and has mastered shading and white contrasts to make realistic likenesses, twinkles in eyes and gaps in teeth. She’s also heavy into big bold heavy lettering like you’d find on the cover of an 80s hairband album, tinged with the sort of gothic aesthetic. Carnival colored Catholic art, featuring the Virgin Mary. Details and small touches, like a Prince Charming making the metal sign, or a pirate ship motif with a subtle treasure map as the back drop. And there is humor: Skateboarder slash professional prankster Bam Margera commissioned one of a bear making furious love to a kitty, with a message for a friend: “Fuck Jeff.”

On “LA Ink,” Kat Von D is more of an all-consuming personality that her staff revolves around, and the art is just another facet in each drama-encased episode. In her book, you get the chance to see the work she does close up. And it is amazing. She is basically this person who broke every single rule on “how to be a success” and has come out on the other side as this incredible artist.