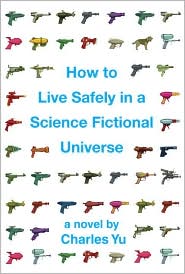 How to Live Safely in a Science Fictional Universe is a fantastic time-traveling, mind-bending, soul-searching journey. The lead character, also named Charles Yu, is an unhappy time travel repairman in Minor Universe 31, a science fictional universe left unfinished by the corporations constructing it.

When he's not repairing broken machines, Charles remains secluded in his time machine and searches for his father who is lost in some universe or parallel world. Charles often contemplates the poor relationship he has with his father, both now and when he was younger. His relationship with his mother is also strained since she's stuck in a time loop that replays the same 60 minutes of her life over and over again.

The emotional lack of personal relationships is a theme that replays in How to Live. In this future world, Charles' closest relationship is to the computer operating system in his time machine, TAMMY, and to his boss, Phil, who is a software program (though he doesn’t know it). Sexbots and beer drinking bots exist, but even some of them feel a lack of intimacy.

I told you it was time-traveling and mind-bending.

It's also mesmerizing and I finished it within a day. I think one would have to, though, since you'll run into passages like this, where Charles reflects upon a book he has been instructed to complete:

Without reading the novel in a small period of time, this could be confusing, or in the least a lot of backtracking would need to be done to remember what's going on. Not all passages are as intricate as this, but the science in the book is, although I could follow it, and that says a lot. I'm far from Bill Nye the Science Guy. I would have been confused, though, had I read this over a longer period of time.

This philosophical romp through our technological future is funny, clever, and touching. The world Yu describes is an labyrinth of time and space, and it completely messed with my mind, but in a good way.