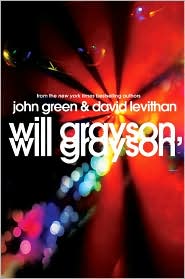 This is the tale of two Will Graysons. Capitalized Will Grayson who is BFFs with Tiny Cooper, a huge gay football star at their high school. And lower case will grayson who is a depressed loner with an internet boyfriend named Issac and one friend, a girl, who wants to be more than friends.

But oh, that Tiny Cooper. I can’t remember the last time I’ve loved a fictional character so much. Tiny’s awesome. The Wills aren’t bad either, but Tiny is the star of the show both in the book and in the musical he produces about his life (thanks to some funding from the student council) initially called “Tiny Dancer” and then renamed “Hold Me Closer.” A play, Tiny says, that’s about love.

I cannot count the ways in which I love Tiny, but I can try. He’s large and out. He’s not afraid to love. He writes a play about friendship and coming out and breaking up and it features the ghost of Oscar Wilde. He inspires both uppercase and lowercase Will to get over their teenage bullshit and challenges them to be happy. He’s a really great, openly gay character who struggles with his size and his sexuality and while at times he seems to slip into stereotype, it feels genuine to his character. Let me say it again, I love Tiny Cooper.

Will Grayson, Will Grayson by John Green & David Levithan is fabulous. FABULOUS! Yes, all caps. It’s that good.

It’s not just that the book is funny, but it’s also about coming of age, discovering the person you are, forgiving the people who hurt you either intentionally or unintentionally, and ultimately it’s about accepting and appreciating the people in your life.