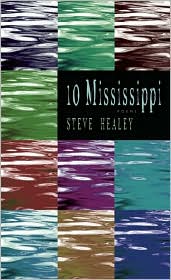 Repetition, alliteration, personification, and a certain amount of attention deficit disorder flow through Steve Healey's newest book of poems 10 Mississippi. And like the uncertain river that flows through our Twin Cities, Healey's poems don't even contemplate being lulling and smooth. They are a jumpy, choppy, force of words.

Elements in combat would be an apt description of these pieces and the water element is certainly a heavy weight. Dead bodies found in the river, holding one's breath underwater, ice cubes, fire hydrants and rain showers fill the pages. 10 Mississippi exposes us to the full, sometimes brutal, force of water.

“My feet are wearing green shoes, and when I walk, the grass grows?except that I'm a liar, in fact the grass is dying. It hasn't rained in weeks.”
– pg 50 “Green Shoes”

There is a playful nature to Healey's writing. Many poems begin with a concept that is instantly relatable to the reader. A game of 'rock, paper, scissors' starts a poem called “New Fighting Technologies.” 'Hide-n-Seek' is the intro to “7 Mississippi,” and the common tongue-twister 'She sells seashells by the seashore' welcomes us to a poem called “Intelligent Design.” This last piece also stands out for its focus on alliteration and sound repetition.

Protected by SPF 30 sunscreen, she sells the idea of having sex with centuries of salty seafarers, not the sex itself but the secret saltiness that causes shoppers to salivate.”
– pg 18 “Intelligent Design”

Personification is present in Healey's pieces and some of it is confounding. In the poem “Slow Emergency,” he writes, “She would not become a telephone while another firepit death occurs” and readers may ponder, why is the focus on the phone, or becoming a poem, when the emphasis should be on the man that just jumped into the firepit. At the same time, it makes us ponder at the characters. Healey may be pushing the dispassion of the human element or he may like the way the words present a certain incongruity. In either case, it is quite interesting.

The book, itself, seems to have a lack of organization to the chapters which are littered with too many quotes that don't really seem to enhance, as much as they detract. And while there's no fault with the cover, it would have been interesting to see an old fashioned pinafore sitting next to a shimmering pool with a shadowy figure at the bottom in reference to Healey's “While I Held My Breath Underwater” or a collage of headline clippings about bodies pulled from the Mississippi, as alluded to in many of his numbered “Mississippi” poems.

10 Mississippi is a unique group of poems that are both elemental and political. Healey has written a solid book of poetry.