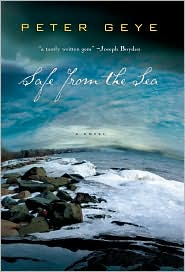 We’re taught from early on that one should never judge a book by its cover. However, I have a crush on the cover of Peter Geye’s Safe from the Sea. I wish I could explain why. It has something to do with the blue, which is why I was pretty pumped to see Peter list Lucinda William’s “Am I Too Blue” on his Largehearted Boy Book Notes essay.

So yeah, Peter Geye, you want to know about the man who actually wrote the book? He’s a smarty pants with a BA, MFA, and a PhD. You can read about that on his website. You can also listen to him read an excerpt from Safe from the Sea. And if you want the real-live version, you should head on over to Magers & Quinn (3038 Hennepin Ave, S.) at 7:30 p.m. tonight (October 18) and see him read for yourself. In the meantime, you can read his answers to the six questions we always ask.

What book(s) are you currently reading?
I'm reading about half a dozen books at the moment, which is not usually how I operate. I'm about halfway through Bruce Machart's The Wake of Forgiveness which is knocking my socks off. Sentence by sentence it's as fine a book as I've read all year, the storyline is addictive, the characters absolutely real and fresh, and the setting, my god, it's on par with the Cormac McCarthy's Southwest or Annie Proulx's Wyoming. It's got the makings of being my favorite book of the year, a title shared by Jon Clinch (for Kings of the Earth) and John Reimringer (for Vestments) at the moment.

Have you ever had a crush on a fictional character? Who?
Oh god, yes! It's a long list, but the number one crush has to be June in Henry Miller's Tropic of Cancer. She's brassy, smart, literary, and sexy as hell.

If your favorite author came to Minnesota, who would it be and what bar would you take him/her to?
My favorite writer, if I have to name one, is Cormac McCarthy. But I'm not sure I'd want to take him to a bar. He seems kind of grumpy. Hemingway would be fun to take to a bar, but I'd be under the table faster than you could say Havana. Maybe I'd take William Gay over to Bullwinkle's. I know it's about the least fashionable watering hole in town, but it's been my bar for more than twenty years. And I bet William Gay would be a fun guy to sit around shooting the breeze with.

What was your first favorite book?
Hemingway's A Farewell To Arms, which I haven't read in twenty or more years. When I was in high school though, I had a teacher who had a profound influence on me, and it was during the reading of this book that the light bulb went off for me: Books could be cool, romantic, interesting, entertaining. I was hooked.

Let’s say Fahrenheit 451 comes to life, which book would you become in order to save it from annihilation?
This one's easy: Moby-Dick. My favorite book and the book that most confounds and edifies me.

What is one book you haven’t read but want to read before you die?
I'm not a religious man, but I'd like to read the bible from cover to cover. And someday, when I have about twice as much time as I do now, I'm going to read Proust's full epic.