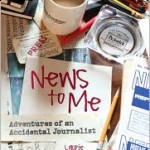 I’m beginning to think there’s something in Duluth’s water. Today, we’ve got our fourth Duluthian (or former-Duluthian, if one can ever be a former) answering the 6 questions we always ask (you can take a gander at the others we’ve featured).

Today we have Laurie Hertzel, Books Editor for the StarTribune. Laurie has recently penned a memoir, News to Me: Adventures of an Accidental Journalist, that chronicles her career and the glory days of newspapers (and typewriters).

Laurie’s been all over Minnesota talking about her book, but don’t worry she’s got three upcoming events you can attend. She’ll be reading at 7 p.m. tomorrow (Wednesday, October 6) at Micawber’s Books, 2238 Carter Avenue St Paul; for you Northerners, she’ll be reading at 2 p.m. October 16 at Cross River Heritage Center, 7932 West Highway 61 Schroeder; and finally, she’ll be at the UofM Bookstore on November 4 at 4 p.m. But today, we’ve got her here, answering our 6 questions.

What book(s) are you currently reading?
There's a teetering stack of books on the bedside table right now, which might fall over and crush me before I get them all read. I tell my husband they have to be there because I'm reading them all, but the truth is they're actually in the “on-deck” circle. The books I'm actually reading are Skippy Dies by Paul Murray; We Need to Talk About Kevin by Lionel Shriver, and Nothing Left to Burn by Jay Varner.

Have you ever had a crush on a fictional character? Who?
Oh, I think I had a thing for Gilbert Blythe (of Anne of Green Gables) back when I fancied myself just one long red braid, a set of parents, and nine siblings away from being Anne Shirley. A little later I fell pretty hard for Captain Wentworth of Persuasion And more recently I took a little shine to Golden Richards, the lonely polygamist. I grew up in a family almost as big as his; I understand that feeling of being alone in a crowd.

If your favorite author came to Minnesota, who would it be and what bar would you take him/her to?
I'd take Lee Smith up to the Kom-on-Inn and show her the great Art Fleming murals from the glory days of West Duluth and buy her a Grain Belt, and I bet within half an hour she'd know everyone in the bar, and would have won their hearts.

What was your first favorite book?
The first book that I bought compulsively, every time I saw it in a bookstore, was The Collected Essays of E.B. White. I had a whole stack of them and gave them to everyone I knew. I've done that with other books since then, but that was the first.

Let’s say Fahrenheit 451 comes to life, which book would you become in order to save it from annihilation?
One book? I can only save one book? I'd save Anna Karenina. It has everything-a great and sweeping story, romance, doomed passion, confusing Russian names, and a restless peasantry.

What is one book you haven’t read but want to read before you die?
Oh, there are so many. Moby Dick. Finnegan's Wake. Every book that I have to say “no” to when someone gushes, “Oh, have you read —?” The list is far longer than the list of books that I've actually read.