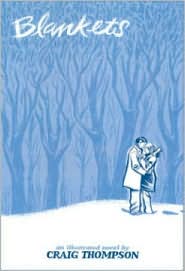 In the days after reading the entire Scott Pilgrim series, I, like many people who went nutso for the scatter-brained Canuck in ironic T’s, suffered something like the delirium tremens.

I’m a total tourist in this graphic novel genre, and wouldn’t know where to begin to look for more like it. Everyone from iO9 to geeky friends recommended Craig Thompson’s Blankets as a sort of graphic novel-flavored methadone. And while it was great and charming and I spent large chunks of the 582-page illustrated novel smiling, it just didn’t have the level of “great” and “charming” that I found with Bryan Lee O’Malley’s six-book parade of Ramona Flowers’ evil exes. In fact, if I’d read this first, I probably wouldn’t have bothered ever reading a graphic novel ever again.

Okay. I get that comparing Scott Pilgrim to Blankets is like comparing The Ramones to Bjork. But what I was looking for was a similar level of satisfaction. Becoming entranced.

This one stars Craig, a young Wisconsinite with superstrict, religious parents, who shares a bed with his younger brother Phil. He gets his ass kicked at school; Diddled by the babysitter at home. He finds respite in dreams, drawing, and snow games. Even among the grunts at church camp, he struggles to find friends. Until he discovers a pack of misfits who have banded together. This group includes Raina.

Raina is this beautiful character, from the soft lines, delicate fingers and soft pout she is rendered in, to the way she is holding together her family. Her parents are on the cusp of divorce. The loving way she handles her special needs siblings, and her baby niece. The way she maturely recognizes that she doesn’t want a life like her older sister with a baboon of a husband and skewed priorities. After camp, love letters and phone calls, Craig goes to stay with her family in Michigan for two weeks and they fall into a swirling version of young love. They stare the sky. They cuddle. They write and paint together. They play house. But there are also moments when Raina pulls back and questions the “why bother” of a relationship with someone who lives eight hours away.

I’m just going to put this out there: dude there is a lot of bible in these here pages. Instead of feeling like I was reading one man’s coming-of-age through the filter of religious fundamentalism, I sometimes felt like I was reading light tracts from Jack Chick. And I get that he is laying the ground work for how he went from point A ( high school student considering the ministry) to Point B (adult with no religious affiliation, who masks this from his family by saying he hasn’t found the right church). But the dark lines, panel after panel of bible verses, and scenes featuring heavenly and hellish creatures were a bit much.

It is also overwrought, with metaphors about blankets and trees and the sky. Scrawled poetry that has the embarrassing feel of a teenager’s puppy journal.

“I studied her,” he writes after they strip down to their skivvies and roll around in Raina’s bed. “Aware that she had been crafted by a divine artist. Sacred, perfect and unknowable. And with reverence, I covered her body with the quilted blanket she had made me.”

And then he wanders back to the guest room to stare at Jesus’ portrait on the wall.

I feel like a dick for not liking this book more. It’s certainly something that is relate-able, considering the Midwest setting, and all-consuming young love. The familial relationships, and Raina singing a Cure song in bed. That this is a memoir-y novel type thing, that religion shaped who he was socially and sexually as a teen. A disinterest in the foundation of the plot represents a taste preference, of course. I guess if I’d done my homework better, I wouldn’t be dissing this book. I just wouldn’t have been interested in it to start with, and so I wouldn’t have read it.