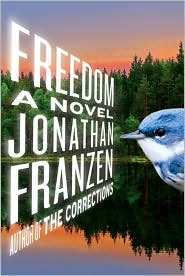 The cover is ugly. The spine features Jonathan Franzen’s name in big block letters, dwarfing the title. I was already sick of the whole Franzen phenomena before I started reading. I barely remember The Corrections, just that the characters weren’t very likeable. After the first twenty pages I wondered if he could keep the whole book interesting. It struck me as Lake Wobegon gone horribly astray. Lake Wobegon on crack. About a hundred pages in, I hardly realized I was under the spell of Franzen’s word sorcery – I was completely immersed in his character’s world.

Being Minnesotan, my perception of Freedom is different than, say, a Brooklynite. Franzen deserves some kind of hotdish award Minnesota medal for the accuracy of knowledge about the state and what it’s like to live here. Macalaster, the Iron Range, St. Paul, 7th Street Entry – he must have lived here at some point. He nails the speech and mannerisms of Minnesota.

The book is parcelled by about four different voices, mainly the Berglund family. The timeline skips around a little bit but the plot isn’t as interesting as the characters’ impressions and experiences. In fact, the whole “save the cerulean warbler” story that ties into Iraq doesn’t start until about page 211. I didn’t care because I was so entertained by the eccentricities and details of the characters, which aren’t as loathsome as those in The Corrections. At least some of them. Patty, the frazzled matriarch of the Berglund clan, is voiced in the form of an autobiography half the time, which is a little confusing, but not so much that it detracts from the book as a whole.

It’s a big book. Franzen can be indulgent. For instance, one sentence is eighty-seven words long. Necessary? No. It could have been longer though. The voice of Jessica, the Berglund’s daughter, is missing, but it probably would have added another 300 pages at Franzen’s rate. His wit keeps the length from stagnating. Richard, Walter Berglund’s best friend, is a musician. Franzen takes every opportunity to skewer the music industry. Just the name of the fictitious bands are awesomely hilarious, my favorite being Tutsi Picnic.

So what is this book about, anyway? The characters. It’s also about Minnesota, birds, Iraq, neighbors, community, New York City, kitty cats, public radio, family, the music industry, sexism, artists, marriage, infidelity, and numerous other subjects. It’s one of the only books I’ve read lately that I wanted to pick up when I got up in the morning and read all day into the night. Total word sorcery.