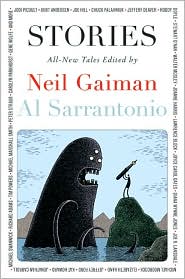 In the introduction, Gaiman states that he and Sarrantonio:

“…wanted to read stories that used a lightning flash of magic as a way of showing us something we have already seen a thousand times as if we have never seen it before.”

Attempting to feature a wide variety of authors, they put a call out for stories featuring very little fantasy or doused in it. Looking at the authors in Stories, I think they succeeded in putting together authors you would not expect to read in the same collection. From Diana Wynne Jones and Jonathan Carroll to Jodi Picoult and Stewart O'Nan. From Joyce Carol Oates and Kurt Andersen to Jeffrey Deaver and Chuck Palahniuk. A Minneapolis author, Kat Howard, even has her first story published here.

There are some amazing stories in this collection. Roddy Doyle's opening vampire-esque story, “Blood,” where a man succumbs to his growing need to eat raw meat, had me feeling the desperation to slurp blood off a plate of thawing pork chops with him.

Joe R. Lansdale wrote my favorite story in the collection, “The Stars Are Falling,” a dark tale of a WWI veteran returning home after coming back from the dead. Was he really dead? You be the judge, but that's not why the story was fabulous. It was such a raw, emotional tale of a veteran returning to a child who doesn't remember him and a wife who has moved on with the younger neighbor. The tale gets even darker when a plot to kill him arises. I did not know Joe R. Lansdale before this, but now I will seek him out.

Not every story in the collection is wonderful, though. It hurts to say this, but Joyce Carol Oates bored me with her demon child tale. Written more like short journal entries, “Fossil-Figures” tells the story of twins, one who tried eating the other in the womb, and their life paths. The short snippets of their lives were small overviews, with little action and dialogue. The womb-eating brother is successful and rich while the other is a hermit. That's about it. Written well, but without action and Joyce Carol Oates dialogue, where I think she is the strongest, I was bored.

Another story that bored me was by Jodi Picoult, though that didn't surprise me. I call Jodi Picoult novels “family drama books” that I would never intentionally start reading. “Weights and Measures” is about a couple trying to overcome the loss of their child, and Jodi Picoult fans would love this story, but I'm not a fan.

And how did our own Kat Howard do in this collection of more seasoned authors? Very well. I didn't love her story, but not because it’s bad. I didn’t love it because I want to hear more. “A Life in Fictions” is about a woman who gets written into the stories her lover writes. The stories are not just about her, she literally disappears from our world and into the stories while they're being written. She eventually starts losing herself in the characters, not being able to distinguish between herself and them. I wanted this story to be longer and give me more about the stories she was written into and her transformation into this mix of characters. This reminded me of the novel The End of Mr. Y by Scarlett Thomas, where the characters jump into the minds of others, and I would love for this story to be expanded into a novel like that.

Overall, this collection is really great. There are many more good than bad stories and this group of authors creates a really diverse collection. Anyone reading this would find some stories they'd love.