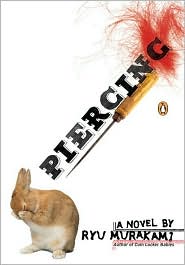 It has probably been two years since I read? In the Miso Soup, which I consider more than just Ryu Murakami’s flagship novel, but one of the few pieces of literature that I still draw on regularly when I want to ush and gush about fiction. I can still conjure what it feels like to read that book: Dreamy, terrifying and lonely, with a touch of nausea. And whenever I get into a conversation about books with someone I know can handle the dankest of dank, and the sourest of sour, the bloodiest of bloody ? something that should be packaged with it’s own air sickness bag — I recommend it.

Since then, I’ve been working my way through his canon, but cannot find another instance of where Murakami gives the literary equivalent of a kidney chop like he did in Miso Soup.

Piercing, which was the followup to the greatest book of all time has moments of sublimely ishy text, but just doesn’t have plot flow that it requires. It’s like using fresh ingredients on day-old bread. Or, in this case, using freshly sanitized puncturing tools on a seasoned cutter.

Murakami gets to his trademark grit on impact, with Kawashima Masayuki watching his newborn daughter sleep in her crib in the middle of the night. Within three pages, he is caressing her cheek with an ice pick. Imagining what it would feel like to puncture the baby’s skin. Instead of following his brutal instincts, he makes himself a promise: He will instead stab a prostitute with the ice pick. Get it out of his system, and save his little family. Kawashima begins filling a notebook with elaborate plans involving gloves, a change of clothes, a falsified accent, and the size, shape and skin color of the victim.

“The woman must be not only young, but petite. A large woman would be more difficult to control in the event of any unforeseen glitches,” he writes after a dry-run with an aged masseuse.

Turns out this isn’t the first time that Kawashima has experienced such a craving. While he has gone on to become a successful graphic designer, a father, the husband of a woman who teaches classes in bread and pastry making in their home, he has had a troubled past. Abused, neglected, eventually raised by a foster family. When he was in his late teens, he got embroiled in a relationship with an older woman. A stripper old enough to sometimes mistaken for his mother, and who openly mocked him by bringing home strange men. One night, in a snit, Kawashima stabbed that woman in the stomach with an ice pick. The police were never involved. The woman lived. They broke up, but she did tell him that it really hurt during a few conversations they had in the aftermath.

When he makes the call to the escort service, Sanada Chiaki’s perspective comes into play. The young OCD prostitute is a cutter who has recently misplaced her sex drive. She’s got her own tales to tell, and when it finally comes down to go-time, things fail to follow the plans Kawashima sketched out so carefully.

Murakami ? a Japanese novelist, musician, TV talk show host ? still manages to write better-than average fiction even at his worst. He creates worlds that look normal on the outside, but when you lift the lid you find it oozing with lawlessness. Well dressed sociopaths camouflaged with manners and hygiene, and bystanders who don’t just turn a blind eye ? they don’t pay close enough attention to notice that anything might be amiss in the first place.

This one is filled with black humor and picturesque words, combined in a way to provide ample opportunity for barfage:

Inspired by a magazine article he’d read and photocopied in the library, Kawashima had decided to buy a knife as well as an ice pick. The article was about a thirty-two year old ‘soap tart’ who’d been found murdered in a hotel room, with her Achilles Tendon severed. An anonymous police detective had volunteered this explanation: ‘When you cut the Achilles tendon, the sound it makes is as loud and sharp as a gunshot. The killer must have known that and taken pleasure in it.

Delicious and visual words, but the apex of the novel is long with frequent perspective shifts that make it a little clunky. So it’s good. It’s just no Miso Soup.