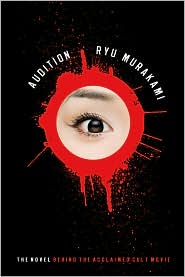 I have learned a valuable lesson: Bitch and ye shall receive.

It has been mere days since I gave the internet sad eyes and whined that Ryu Murakami was failing me. I had been reading so many of his words without once feeling like I was going to soil the pages of his book with high-speed regurgitated Annie’s Mac. Or even taking evil glee in his creatively-armed sociopaths inventing new ways to torture the freaks and geeks who probably would have tortured the sociopaths first if they only had a sharp enough implement in their murse.

The answer came in a book I wasn’t even wickedly stoked to read. I just picked it up because I was in a Japanese bookstore rich in untapped Murakami and when would I ever be there again? Audition, a deliciously-paced, somewhat cheesy iota of a suspense novel. Something more along the lines of an old school short story by Joyce Carol Oates.

Aoyama has been playing it straight in the seven years since his wife died. He set some goals, met them, and sure he banged a stray here and there — he’s not dead — but he has been out of the relationship loop. His 15-year-old son suggests that Aoyama get married again, and the widower kicks around the idea with his wingman Yoshikawa. He has a specific type of woman in mind. Someone similar to his wife, with an artistic background. But he doesn’t want to play reindeer games with a steady stream of ladies.

Yoshikawa, who is in the movie biz, devises a plan that is just inside the gray area of ethical: He’ll build bucko hype around a film, then hold auditions. Aoyama can weed through the starlets for his perfect mate. Mr. Romance sifts through head shots and essays and falls for a former ballet dancer who describes her career-ending injury in a way that Aoyama can relate to. And when she comes in for her “audition,” there is damn-near a barometric change in the atmosphere.

“It was like being the millionth visitor to an amusement park, suddenly bathed in spotlights and a rain of balloons and surrounded with microphones and flashing lights.”

Yamasaki Asami says all the right things, blushes on cue, and leaves Aoyama a stuttering mess of puppy love. He goes off book and begins wooing her, and she responds with asthmatic levels of adoration.

Murakami drops in some hokey, horror flick clues, which come off as funny rather eye-roll inducing obviousness. Like a self-aware mockery of suspense. At a restaurant, the couple runs into a man in a wheelchair who sees the woman and begins to cause a scene before he is silenced by the staff. Aoyama’s best friend is doing some Hardy Boys snooping, and reveals some sketchiness in what she has claimed as her back story. Aoyama’s 15-year-old son warns his father that girls these days are different, perhaps not to be trusted.

This novel is short at less than 200 pages, and it never lags, bogged down by fatty excess. Murakami opens with intrigue and continues to build toward a grisly finale that literally ends on the last page. It’s not as sick as Murakami has been known to go, but it is sick enough to remind you of where he has taken his work. And once again, like the most memorable scene in his novel In the Miso Soup, he has created a scene that will definitely leave an aftertaste long after the story ends.