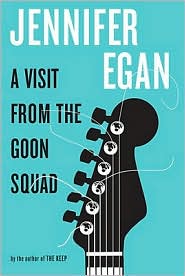 There is a scene in Jennifer Egan’s A Visit from the Goon Squad, when an aged and plumped and be-cancer-ed rock and roll star named Bosco is pitching an idea to his publicist: He wants to tour again in support of his album “A to B.” A suicide tour. He doesn’t want to fade away, he tells her, he wants to flame away. A spectacle. An attraction. Everyone knows he is going to kick it, they just don’t know when or where. He wants interviews and videos and every humiliation documented.

“The album’s called ‘A to B,’ right?” Bosco said. “And that’s the question I want to hit straight on: how did I go from being a rock star to being a fat fuck no one cares about? Let’s not pretend it didn’t happen. . . . Time’s a goon, right? Isn’t that the expression?”

Time is, in fact, the title goon of this novel full of short stories, a collection of pulse points in the lives of a full squad of players in the rock and roll scene. Each stars a character that is connected to another in a way that ranges from meaningful to fleeting. Then Egan upped the difficulty level: Each story can stand alone as a short story — and in some cases has actually been published elsewhere. And it isn’t told in chronological order.

“Goon Squad” starts with a recurring face — Sasha, an assistant to Bennie Salazar, a biggie big in the music biz. Sasha is a klepto with a shrine to the scarves, wallets, and bath salts she has filched. She is telling her therapist about a moment in the ladies room, while she is on a date. A woman is in a stall making agua, her wallet hanging out of a purse next to the sink. It’s an easy pick for Sasha, who takes the wallet and returns to an otherwise blase night newly invigorated and primed for some eff you en. She throws flirty eyes at the man, and they end up back in her apartment in her bath tub — located very New York City-ly in her kitchen.

Later we will see Sasha as a post high school runaway in Italy, through the eyes of the uncle who is trying to find her. Then as a college student, newly in love, as witnessed by her suicidal best friend, a man who can spoon her but is not allowed to love her. Eventually Sasha’s daughter gets to tell her own story — which she does with Power Point slides. One thing young Allison has learned in school is: Add a graphic, increase your traffic!

Speaking of invigorated and primed — Bennie is looking for a little bit of that. First he adds pinches of real gold flecks to his coffee because he read that it will spark his libido. He tests the validity of this by peering down Sasha’s shirt and hoping for a bonedog. He is recently separated from his wife, and at the suggestion of his therapist is making a list of his life’s embarrassments to tell his young son on the back of a parking ticket, instead of actually telling his son that he, for instance, tried to make out with a Mother Superior.

This collection packs a lot of wow. Like, exclusively wow. The characters are well-formed, real and unique, and when they show up in the periphery of another tale it’s like running into an old friend. Egan dropped fun crumbs in the story, including that the novel is broken into two parts: A and B, just like Bosco’s return-to-rock-n-roll album. And when she dares to delve into the near future, it’s as recognizable as the near future where Gary Shteyngart set Super Sad True Love Story. It’s a world where text messaging is its own language, and the preferred method of communicating with someone who is sitting across the table.

Not to mention, when it ends there is plenty to think about once the book is shelved: The toll of time, the people who come into your life, take a bath in your kitchen bathtub, and years later can only remember the barest of details from the experience: Something weird with a wallet, eventually a name.

This is the first time in years that I’ve finished a book, closed it, and been compelled to start over again on Page 1.