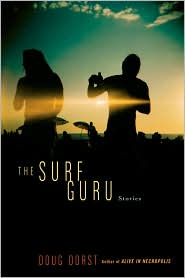 Well. Now Doug Dorst is just showing off. The relative newbie to the world of book glue’s new collection of short stories The Surf Guru, is so fun, so clever, and so so exciting that it will make people who play with words drool.

Reading his series of twelve tales is like watching a contortionist bend and shape shift, and thinking: “Holy crap. Do you even have a human rib cage?”

Dude’s brain is ambidextrous: One minute he is writing about an aged surf hero with a line of products that includes dog food, a handful of pages later he creates a young hard-luck housesitter who keeps flunking her truck driving road test. There is a seemingly normal cake maker who jealously veers into Crazytown while her daughter OCD’s herself into male-pattern baldness, and best buds on the lam from the law who come into possession of a … baby.

There is so much treachery involved. At least twice I started a chapter, fully prepared to be bored by the subject. His story “La Fiesta de San Humberto el Menor,” which is based on the song “Paradise” by Alejandro Escovedo, seems like it is going to be the stuff of dime-a-dozen Western fare starring a suicidal fruit stand owner with a taste for tequila and a wife who ran off with the rich white asshole who owns the town. Read a little closer and it has more in common with the 80s comedy “The Three Amigos.” The formula is there, but the common and age-old language of the genre has been replaced with the absurd. And, yet, Dorst never cracks a smile, oh he of the proverbial poker face.

In “Twelve Portraits of Dr. Gachet,” the language is so 1889 that to read it without an accent is damn-near impossible. It is the story of a wanna be artist doctor, and the Van Gogh-ish painter he is treating with his special brand of medicine.

Just Dorst’s experimentation with “Splitters” a series of portraits of characters in the world of botany — what the writer might consider his flagship of the book — fails to hold attention, even with its portrait-style photographs, and maybe because of the footnotes.

Dorst’s debut was the novel Alive in Necropolis, a mix of police jargon and other-worldly gangsters set in a town heavily populated with ghosts. What made “Necropolis” such a pleasure is also what works in this collection: A wit so dry that it could be used as kindling. You might not even notice what he is doing, or how much fun he must have had rearranging these sentences on the page. His novel fell flat in the finale. The short story form may be Dorst’s forte. Think Neal Pollack, but a less concentrated, far less overwhelming Neal Pollack. He is the writers’ writer, and he makes the trickiest tricks look so damn easy.