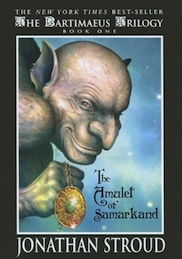 Nathaniel is an eleven-year-old apprentice to a mediocre magician. Thinking he isn't be taught fast enough, Nathaniel trains himself on more difficult spells well beyond his abilities. When an accomplished adult magician humiliates Nathaniel in front of a huge crowd, he skillfully summons a powerful djinni, Bartimaeus, to help him enact revenge.

Djinnis have been summoned by magicians for thousands of years, and often it is they who carry out the most dangerous, creative deeds magicians need, but Bartimaeus has never been summoned by one so inexperienced, which causes problems for both of them.

Nathaniel's continued missteps and Bartimaeus' wit made me love Jonathan Stroud's The Amulet of Samarkand, the first book in The Bartimaeus Trilogy. With chapters told in the first person by Bartimaeus mixed with third person chapters focusing on Nathaniel, this is a great fantasy involving revenge, magician conspiracies, and some fabulous magic.

The story is enough to keep anyone intrigued, but the cleverness of the world Stroud created is why I will continue reading the series. I loved things like magicians having to change their birth name during their apprenticeship because knowing a magician's birth name is something that can be used against him in the magical world. You can probably guess that Nathaniel isn't exactly the best at keeping his name secret.

I also love the fact that Stroud used footnotes in the chapters told by Bartimaeus. I love reading the clever footnotes where Bartimaeus gives historical context or where he directs snarky comments towards me, like this one where he further explains hitting his head five times on a pebble:

Once each on five different pebbles. Not the same pebble five times. Just want to make that clear. Sometimes you human beings are so dense. p. 12

If you're looking for a great fantasy novel that will make you laugh along the way, this is the one for you. You'll love Bartimaeus and look forward to the two other books in the trilogy.