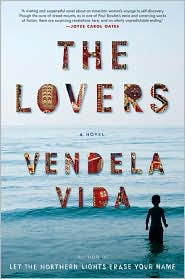 I made a rookie error and poor, poor Vendela Vida’s novel The Lovers is the innocent victim.

It all started when I fell madly in love with Jennifer Egan’s book A Visit from the Goon Squad. I lovingly caressed the cover, made kissy faces at it, considered starting from scratch and rereading it immediately. I tried to think of a better book in all the world over, and failed. I sighed a lot. The music of REO Speedwagon finally made sense to me.

What I should have done: Chased it with something completely different from a a faraway section of the bookstore. A food memoir, travel essays, or lousy vampire fiction.

What I did do: Chased it with Vida’s book. Climbed right back into a piece of contemporary fiction. Stupid. STUPID.

The end result wasn’t pretty. The Lovers is probably a better book than I think it is, in light of where it fell on my reading list. It unwittingly became the block of Velveeta you are forced to consume when you finish the $40 chunk of brie, but still need a taste of cheese.

Yvonne is zeroing in on her twilight years. The school teacher’s husband died tragically two years earlier, and she has adult children, twins with very different lives. Matthew is a success, with a fancy pants fiance and a cool job. Aurelia is a recovering addict who tormented the family through her teen years, with her in and out of rehab bit.

Matthew has invited Yvonne to go on a cruise with his fiance’s family, but instead she decides to travel to a small town in Turkey where she and her husband had honeymooned a zillion years ago. She’ll catch her son during a leg of his trip, but mostly try to recapture her own sense of adventure with this solo gig. Yvonne’s got an itch to reclaim the sense of adventure she had when she was young.

Times have been tough. Yvonne feels like she is on everyone’s watch list, and during the past school year she presented the same lecture, word for word, twice in the same week.

But instead of being a healing trip, per se, Yvonne spirals toward her emotional breaking point — helped along by a whack tragedy that pages later is still a head scratcher of an event.

Vida’s novel feels a lot like an Anne Tyler creation, with its quaint thises and thats. The defining moments of the book are kind of snoozers. In one, Yvonne drives her rental along a freshly tarred road and ruins the exterior of the car; In another, an owl gets trapped in the house, which is seemingly an omen. A very obvious omen. There is also a boat ride with new friends during bad weather. Yawn. Yawn, double yawn.

There is also a lot of introspection about her family life back home. Yvonne spends much time thinking about her husband Peter, weighing their relationship and what it was worth, and the struggles with Aurelia and how that affected them all.

Maybe under different circumstances I would have found this book beautiful and light. A pleasant read about a woman popping her emotional bubble. But under the circumstances of cracking it immediately after finishing the epic piece of awesome that is A Visit from the Goon Squad, The Lovers felt dull and uninspired.