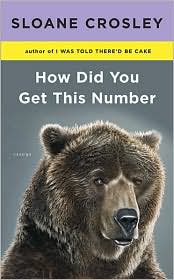 I am going to write something here that applies to Sloane Crosley and only Sloane Crosley, and God help us all — please don’t let anyone else take this bit of advice and apply it:

Sloane, you need to write more about your personal life. Dates and dudes. Relationships that lean horizontal. Getting dumped and squeezing the living shit out of a bunch of oranges. I know this is problematic: You live in New York, and when a young woman lives in New York and writes essays she gets Carrie Bradshaw’ed into a little pink box. Even if the writer spends 200-plus pages riffing on everything but shoes. But I believe in you, Sloane. I think you can do it in a respectable way, and never have to say the words: “Hm … I guess we should go with the lipstick font for this book. Is there any way to make it look like I’m lounging in a martini glass?”

Crosley’s second book of essays How Did You Get This Number, is at its best in the finale of the nine-chapter follow up to the extraordinarily meh, albeit critically well-received debut, I Was Told There Would Be Cake. The essay “Off the Back of a Truck” is a story of a) meeting and falling for Ben, who is so entrenched in her social circle that it seems impossible they had never met before; b) browsing in an up-scale furniture store, and falling face-first into a connection from the stock room who scores her discounted goods with some back alley wheeling and envelopes filled with cash.

Crosley weaves these two stories in a deliciously teasey way under the umbrella: “If you have to ask, you probably can’t afford it.” The relationship is void of cliche. She reluctantly reveals his eye color, straying to Crayola Big Box depths for “a dirty peridot color” but admits she has forced her brain to compartmentalize his image. And the rug, dresser, and other luxury pieces she scores for fast-food prices is just so bizarre and shady and stars such a likable criminal.

As for the other eight essays: They’re fine. Just like they were fine in her last book. There is no doubt that she has led an interesting life. On the cusp of her 30th birthday she makes travel plans by sliding her finger aimlessly along a globe, which is how she ends up in Lisbon, playing a version of “Win, Lose, or Draw” to communicate with circus performers.

In another essay she has a super-awkward exchange in a confessional at Notre Dame Cathedral, Crosley being Jewish and all. There is a trip to Alaska where she witnesses the execution of a bear cub, the victim of a hit-n-run.

Unfortunately, these stories are so controlled, so antiseptic, so public relations, and so so not risky. She writes like her mom is reading over her shoulder. Even when Crosley mentions smoking weed out of her apartment window, it seems more of a ploy, a purposefully dropped mention, than a revelation. Her humor is easy, although very pedestrian in a way that leads me to believe that outside the book binding she uses the eff word as every part of speech, and has been known to make a male genitalia joke. But she doesn’t want you to know this.

I imagine people like Sloane Crosley because she is someone they can relate to. The horror of junior high slumber parties, and then reconnecting with the Queen Bee bully years later. The carefully laid bread crumbs that show she is quirky (She imagines keeping a midget in this strange cupboard area of her apartment!) in that way that we all need to believe that our OCD moments and guilty pleasures make us unique. But her relate-ability has such a generic-ness to it that it is without heart. Like a person who is considered a great conversationalist because they listen well and remember the name of your hometown. But what is her favorite song? Shrug.

This is why “Off the Back of the Truck” works so well. She lets her hair down. She squeezes an orange in frustration. Her mind is blown, and you can see her sweeping the pieces into a dustpan, and throwing it all away. I’m not suggesting that Crosley’s next book should be a chronology of her relationships. But I do think if she should put some of that za-za-zu into everything she writes and scrap things like, oh say, the rank nature of cabs in NYC.

Oh. And since I’m here: The cover of this book is really, really ugly.
And: Every once in awhile Crosley has a really good couple of lines, like this — when she is describing apartment living in New York.

Showers in kitchens, toilets in living rooms, sinks in bedrooms. It was as if Picasso were born a slumlord instead of a painter.