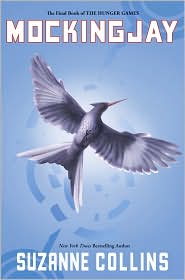 Unable to read Mockingjay until three days after its release, I stayed off Twitter and Facebook to avoid spoilers. I ignored emails with Mockingjay thoughts or links to book reviews. I didn't even read the book jacket. When I'm looking forward to a book, especially the last in a series, I want to dive in with a blank slate.

If you loved the first two books of The Hunger Games series by Suzanne Collins, you should do the same. Stop reading this review and dive into Mockingjay. It's worth it; you'll adore it. It may even make you cry.

If you haven't started reading The Hunger Games series (Jodi, are you listening?), you should also stop reading and go get the first book. What's not to love? A country divided and ruled by the ruthless Capitol, and a strong, smart girl challenging them at every turn. Succumb to peer pressure and start reading already.

If any of you made it this far, you're the diehards, the ones who loved the first two books and have already finished Mockingjay. This review is for you.

The last time we saw Katniss, she was again defying the Capitol and living through the Hunger Games. The fight-to-the-death games, forced upon each District of Panem by the cruel Capitol and broadcast live across the nation, were just as violent as ever, but these games ended with half of the surviving victors whisked away to safety and the other half captured by the Capitol. Little did Katniss know, these games were actually a critical part in the uprising against the Capitol.

Mockingjay opens with the aftermath of the Capitol's retaliation when we follow Katniss through the wreckage that was her home, District 12. Walking over skulls and on ashes, Katniss blames herself for those who died and she contemplates whether or not she can do what they're asking of her in District 13.

District 13, thought to have been destroyed years earlier, is the home base for the uprising, and they need Katniss. Beloved because of her defiance in the Hunger Games, District 13 believes Katniss can unite all the districts and encourage them to fight.

Making Katniss the face of the uprising doesn't necessarily sit well with her. Are they just using her as a pawn in a game, just like she was during the Hunger Games? Throughout Mockingjay Katniss questions this and the cruelty of war, from both sides of the conflict. Where do you draw the lines for what is acceptable in war? Can that even be defined?

Mockingjay is a great ending to The Hunger Games series, though it is unsettling and has its share of sorrow. Some of your favorite characters may die and the final question – will she choose her best friend Gale or her Hunger Games partner Peeta? – will be answered, though nothing really ends happily here. You will have some hope, but I just felt overwhelming sadness for Katniss, so the little bit of hope I had wasn't enough. War is a bitch.